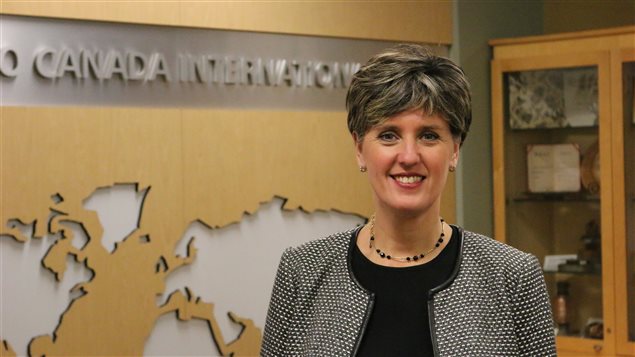 The Liberal government of Prime Minister Justin Trudeau will mark its second anniversary of coming to power on Nov. 4.

Trudeau made the promise of Canada’s re-engagement with the world one of the hallmarks of his new foreign policy.

Minister for International Development and La Francophonie Marie-Claude Bibeau graciously agreed to sit down for a one-on-one interview. We discussed the change in Canada’s international assistance policy enacted under the new feminist foreign policy.

We talked about the crisis with Rohingya refugees as well as Canada’s peacekeeping commitment. And Bibeau shared an emotional testimony of her own interactions with victims of sexual violence in many refugee camps around the world she has visited in her capacity as Canada’s minister for international development.

L.S. Your government is going to celebrate two years in power soon. You have been the minister for International Development and La Francophonie, it was a difficult file with all these international crises taking place. What do you think was your biggest accomplishment in these two years?

M-C. B. Actually, the mandate that the prime minister gave me was to refocus international assistance towards the poorest and the most vulnerable and to fragile states. And as you said we’re going through a period of many crises around the world – climate change but [also] many conflict-affected crises.

But maybe I can start with the refocusing of our policy.

To update the policy we’ve been through very important consultations: 15,000 people participated in a way or another in this consultation in 65 countries, because it was very important to me and to our government to get the priorities of the countries where we were and also to learn from the experience of other donor countries. It was a very-very serious process that we’ve been through and we came to the conclusion that if we want to end poverty, the best way to do it is to empower women. This is why we have now a Canadian international assistance, well a feminist international assistance policy.

L.S. Let’s talk about it. What does it mean to empower women? What does it mean in practical terms when you are deciding on development projects, on money that is going to be spent, how that concept gets translated into reality?

M-C. B. We used to ask our partners to make gender-based analysis to see if their project had any impact on women in the field. But now we are asking our partners, those to whom we give money, to first consult women locally, to make sure that they understand properly what their priorities are, what their needs are, what are the best ways to implement a project.

Second, local women have to be part of decision-making. And then the project has to be designed in a way that it will empower women, so women must not be seen only as beneficiaries but powerful agents for change, development and piece.

L.S. In situations such as the recent crisis in Myanmar where we have close to a million refugees that have trickled out of Myanmar to Bangladesh, with the majority of them, over 70 per cent women and children, what difference does that approach make there?

M-C. B. We encourage our partners without earmarking our financing because this is not what we do in a humanitarian environment. We do support the partners who are working to meet the specific needs of women.

You talked about Myanmar, I learned this morning that there are more or less 20,000 women who are pregnant. There are so much gender-based violence in these crises environments. So these women need medical services, of course, but also psycho-social services, they need family planning, they need safe sanitary installations  – so all these specific needs that women have must be met and must be taken into account, and we know that they are the majority of population in these refugee camps.

L.S. There are a number of severe crises around the world – there is the crisis in South Sudan, in Yemen that unfortunately doesn’t get as much attention as in other areas – how do you as a minister or as a government decide who gets the limited number of dollars that we as Canadian taxpayers provide you with?

M-C. B. We work with those partners who have the ability to work in these very difficult environments because we know that it’s more and more difficult to have access for humanitarian… or to provide humanitarian assistance. So, we work with them to figure what the needs are and how Canada can have the biggest impact.

And we kind of have our fair share of contribution in these environments. We try to distribute the amount of money that we have and if we talk about really humanitarian assistance, Canada gives more or less about $800 million per year to humanitarian assistance. So, we try to go where the crises are the worst, where our trusted partners are in a position to provide services and to do our fair share.

L.S. What happens in situations when there is a sudden crisis?

M-C. B. Actually, there are two different mechanisms. So the first one is we give money to some of these major partners who are the first ones to be there when natural disasters happen. Take for example the Red Cross. We give every year a certain amount of money to the International Red Cross so when a natural disaster happens, they already have Canadian money in the bank so that they can react quickly, the same day. As soon as they can get there, they already have Canadian money in the bank to react.

Second, we have what we call the “crisis pool.” This is a special fund that I have access to with the authorization of myself, the minister of foreign affairs, the minister of finance and the prime minister. There are four of us to access the crisis pool and this can be done in a couple of days, so it could be very quick.

We have an even more rapid mechanism which is called “the quick release mechanism,” which I have access to alone.

L.S. Do you have an example where you had to use this mechanism recently?

M-C. B. Actually in Myanmar, I just announced last week an additional $12 million dollars, which brings our Canadian contribution to Myanmar this year to $25 million dollars. And I used the crisis pool because what’s going in Myanmar, well in Bangladesh right now with 900,000 refugees within two months is considered a special situation and I did use the crisis pool for that.

L.S. Your government has appointed Bob Rae as envoy to Myanmar to I guess try to communicate Canada’s position more strongly. What are you planning to do with that file? It’s a very interesting situation where you have a civilian leader, who’s an honourary citizen of Canada, who might not be in full control of military resources that are being brought to bear on these refugees. You have an insurgency going on there as well. How do you as a minister looking into the situation decide what you do?

M-C. B. Actually, the prime minister himself got involved in this situation, he had a conversation, he wrote a letter to Aung San Suu Kyi. The minister of foreign affairs is also directly involved and had a conversation with the military general. You’re right Aung San Suu Kyi doesn’t have full power over this government so our special envoy will push forward the position of Canada, will investigate, will have a close look, will be in the field to see what’s happening.

We will see what Canada can do to support the recommendation that have been made with the report of Koffi Annan, for example. Being there in the field with the experience of Mr. Rae we hope that we will be able to push forward the implementation of this report.

L.S. In a couple of weeks in November Canada is going to host the ministerial meeting on peacekeeping in Vancouver. Should we expect a major peacekeeping announcement there?

M-C. B. I cannot talk about it directly but what I can tell you that we’re almost done with the review of the Women, Peace and Security policy, which is related to the resolution 1325 of the United Nations.

We are working – Minister Sajjan (Defence Minister Harjit Sajjan) and myself and Minister Freeland (Foreign Affairs Minister Chrystia Freeland) – on this Women, Peace and Security new policy, which involves more participation of Canadian peacekeepers and Canadian women police officers but also finding ways of having more women within the peacekeepers of the different countries. Training them, for example, making sure that these women and men who are peacekeepers coming from different countries are well-trained to face, to act and to behave in front of gender-based (violence) survivors.

This is something that we are looking at carefully. It’s also important to have more women in the peacekeeping forces because these women can get a different type of information from the field and understand differently, which is complementary to the men, what’s going on in the field and how we should react and what we can do to improve the situation.

We also want to promote the presence of women around the negotiation process table. We are all working together to improve our Canadian participation towards the contribution of women peace, security and peacekeepers amongst others.

L.S. My last question. You are one of the best travelled international development ministers, at least in my recent memory, I don’t remember other ministers travelling as much as you do. What has been the spot that touched you the most?

M-C. B. I started my career in international development so I was used to development and to poverty. But since I’m a minister, I have visited many refugee camps in Iraq, Jordan, South Sudan, DRC (Democratic Republic of Congo), and shortly in Bangladesh. This is different, this is hard. I always have one on one conversations with sexual violence survivors. These discussions are always very hard because rape as we define it here in Canada is not what it is in these countries. They use the body of a woman to destroy a whole community… it’s much more violent… it’s really heard. But at the same time these women spend more time thanking me, thanking Canada for what we’re doing for them to give them a second chance in life than the time they take to tell me what they are going through.

I also want to say that humanitarian workers are my heroes because they work in very difficult environments.

L.S. Thank you very much.