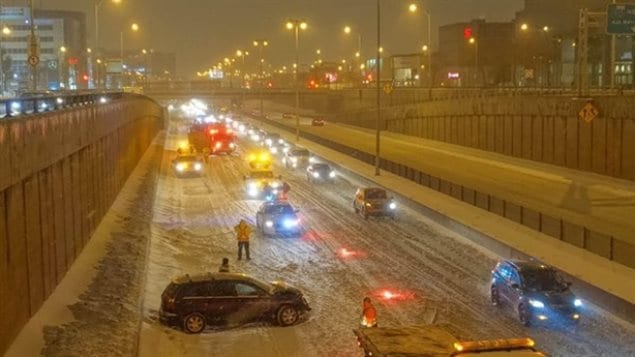 Snow makes it all the more challenging for drivers, such as these during a March 2nd storm in Montreal in 2016.
Photo Credit: Radio-Canada / Simon-Marc Charron

Snow, or the first “measurable snow” will be making its debut in southern Ontario and Quebec tomorrow and continue over the maritime provinces through the weekend.

Canada’s Weather Network is on storm watch cautioning people in Toronto and Montreal, two of the largest cities in Canada, to prepare for both the snow and the severe drop in temperatures.

Described as a “vigorous cold front” the system will bring strong northwesterly winds in its wake, causing blowing snow which will reduce visibility from drivers.

After a balmy and mild autumn so far, this weather and the resulting 5 centimetres of snow may come as a shock to many people.

In Quebec it not mandatory to have snow tires on until December 15th.