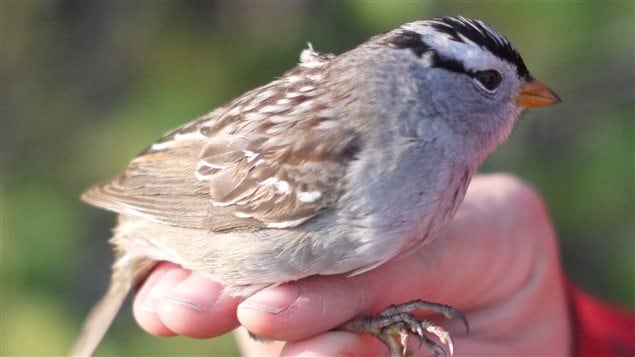 The white crowned sparrow is among the songbirds found to be acutely sensitive to insecticides.
Photo Credit: Margaret Eng

Research at the University of Saskatchewan has linked the use of two kinds of widely-used insecticides to serious health issues in songbirds.  Scientists found that imidacloprid (neonicotinoid) and chlorpyrifos (organophosphate) are directly toxic to songbirds that eat seeds.

“What surprised us was how sensitive and rapid the effects were, particularly to imidacloprid,” said Christy Morrissey, a professor at the university in a news release. “The birds showed a significant loss of body mass and signs of acute poisoning (lethargy and loss of appetite). The migration trials also showed that birds completely failed to orient or changed their northward orientation.”

Although most of the birds survived and recovered after they stopped ingesting the insecticides, the study’s co-author, Margaret Eng said the effects were severe enough that the birds likely would have suffered migratory delays or changes in their routes. That could reduce their chances of survival or breeding.

The government of Canada is currently considering a proposed ban on imidacloprid.

The study was published in the journal Scientific Reports.