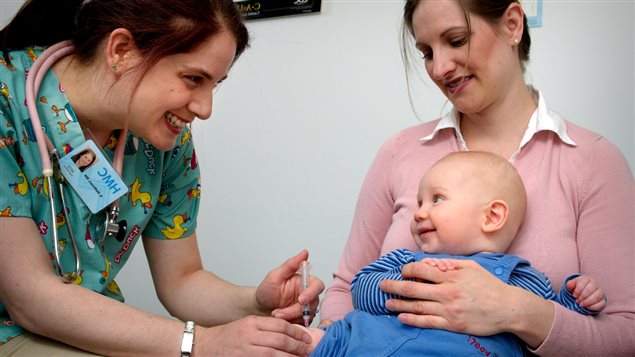 A parent’s behaviour has a great effect on the pain a child feels after getting a vaccination needle, according to a new study.

A long-term study of children shows that the amount of pain and distress felt by preschoolers after vaccination is strongly related to how their parents help them cope. Researchers at York University in Toronto found that preschoolers can cope with pain, but are best off when parents encourage them not just before the appointment but during it too.

And the effects of parents’ encouragement and soothing during immunization seemed to carry over from infancy. “We found that, amazingly, things that parents were doing five years ago, when the child was two months old, was still predicting preschoolers’ pain and coping,” said Rebecca Pillai Riddell, a professor and senior author of the study.

“So, we found that parents who were really closely soothing their infants—so bringing them in to a calm, close cuddle during the vaccination–were parents who were not only doing that at preschool but also had children who coped better post needle.”

The kind of parent behaviour that had a negative effect on children included too often saying that everything was okay, saying negative things like ‘big girls don’t cry’ or otherwise chiding the children. What did work was holding the children close, acknowledging their pain and then distracting them with something entirely different like plans for a sleepover or trip to the library.

“It was this interplay and understanding the relationship between child and caregiver behaviours and how powerful parents are in shaping their infant and preschooler’s pain response,” said Riddell.

This, she says, is very important because it suggest that if children have a negative, painful experience during vaccinations early in life they may be less likely to seek a flu shot or other preventative care from health professionals.

The study was published in the journal Pain.