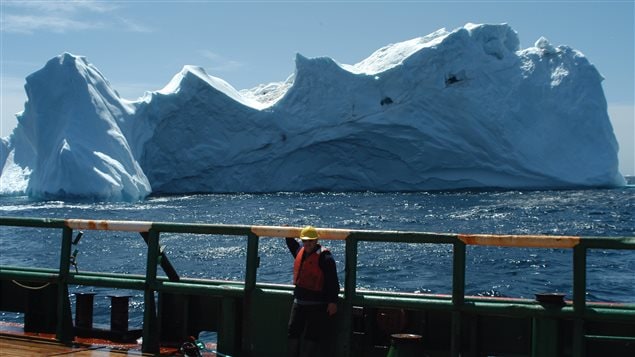 Ships can be sent to tow icebergs that are identified as a threat.
Photo Credit: C-Core

People from all over the world have joined a competition to find a better way to identify icebergs floating south from the Arctic. Satellite images and radar show blobs on the ocean but they must be analysed to determine whether they are ships, marine mammals or icebergs. People are good at that, but machines are faster and the search is on for new and better computer technology.

There is great demand for information on icebergs for several reasons. They are a threat to ships. Oil rigs are designed to withstand iceberg hits, but they must be shut down if that seems imminent and that is costly. And tourists and the tourism industry want to be able to find icebergs for viewing purposes.

Response may be due to ‘cool factor’

About 1,500 teams so far are competing to find better technology and a chance to win the $50,000 US in prizes. The response has surprised Desmond Power, vice-president of the company that co-launched the competition, C-CORE. “We figured initially that we might get a couple of hundred people interested and we really underestimated the curiosity or the cool factor associated with this project,” he said

“We live here in Newfoundland so we see icebergs all the time in the spring…so it’s kind of like old hat to us. But I guess it’s very cool to people who have not seen satellite images or not seen icebergs.”

Those competing have a chance to look at satellite images of about 5,000 targets and find ways to distinguish what they are. The contest closes on January 16, 2018. It was launched by C-CORE and the Norwegian energy company Statoil.