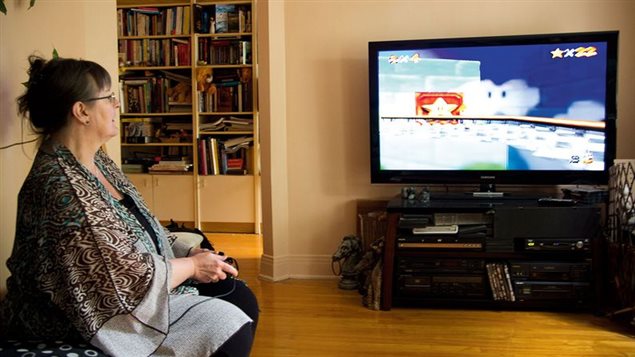 A participant takes part in the study at her home by playing a video game.
Photo Credit: Simon Coutu/Science Québec

Playing 3D video games like Super Mario 64 could stave off mild cognitive impairment and perhaps even prevent Alzheimer’s disease in older adults, according to a new Canadian study.

The findings of the study by Université de Montréal (UdeM) psychology professors Gregory West, Sylvie Belleville and Isabelle Peretz were published Wednesday in the online scientific journal PLOS One.

“What we found was that people who played 30 minutes a day over period of six months experienced increased growth in the brain structure called the hippocampus,” West told Radio Canada International. “This structure is important for spatial memory, remembering where you parked your car when you go into the store, or even episodic memory, remembering your life’s events.”

The grey matter in the hippocampus acts as a marker for neurological disorders that can occur over time, including mild cognitive impairment and Alzheimer’s.

(click to listen to the full interview with Gregory West)

In 2014 and 2017, West and his colleagues conducted two separate studies where young adults in their twenties were asked to play 3D video games of logic and puzzles on platforms like Super Mario 64. Findings showed that the grey matter in their hippocampus increased after training.

They now wanted to see if the results could be replicated among healthy seniors, West said.

The research team recruited 33 people, ages 55 to 75, who were randomly assigned to three separate groups.

During the six-month experiment, participants in the first group were instructed to play Super Mario 64 for 30 minutes a day, five days a week.

The second group was asked to take piano lessons for the first time in their life and practice 30 minutes a day, five days a week.

Participants of the third group went on with their usual daily routines without learning or performing any new tasks.

The experiment was conducted in the participants’ homes, where researchers installed game consoles and electronic pianos, provided by West’s team.

The researchers evaluated the effects of the experiment at the beginning and at the end of the exercise, six months later, using two different measurements: cognitive performance tests and magnetic resonance imaging (MRI) to measure variations in the volume of grey matter, West said.

The research team observed brain activity and any changes in three areas: the dorsolateral prefrontal cortex that controls planning, decision-making and inhibition; the cerebellum that plays a major role in motor control and balance; and the hippocampus, the centre of spatial and episodic memory.

According to the MRI test results, only the participants in the video-game cohort saw increases in grey matter volume in the hippocampus and cerebellum. Their short-term memory also improved.

The tests of the participants who took piano lessons revealed grey matter increased in the dorsolateral prefrontal cortex, West said.

“What we basically observed is both types of training produced benefits when looking at growth within the brain, just different structures were affected,” West said.

However, in the passive control group researchers observed some degree of atrophy in all three areas of the brain.

“We believe it’s something specific to do with what the video game asks the player to do,” West said. “In a game like Super Mario 64, people are asked to navigate in a virtual environment and they’re also asked to remember where items are within that environment. We believe what people are doing when they are playing this game is what we call creating a cognitive map, a mental representation of the virtual environment.”

Many studies show that this kind of activity recruits the hippocampus, leading to growth of grey matter, West said.

On the other hand, when the brain is not learning new things, the grey matter atrophies as people age.

So if you want to keep your mental agility as you age, get out of your comfort zone and learn something new, West said.

“Learning something new seems to stimulate the brain, something that we find challenging and once we’ve mastered that, maybe move on to something else,” he said. “If you’re more interested in learning the piano, veer towards that first. If you’re always been interested in playing video games, learn to do that, it looks like fun when you’re watching your grandchildren play, then maybe choose a game like Mario 64.”

But stay away from first person shooting games, warns West. A study published by his team earlier this summer showed that these kind of games have a negative impact and actually decrease the grey matter, West said.

That’s the subject of his next research.

“We would like to actually isolate different aspects of game design to experimentally test what is causing this difference in change,” West said.