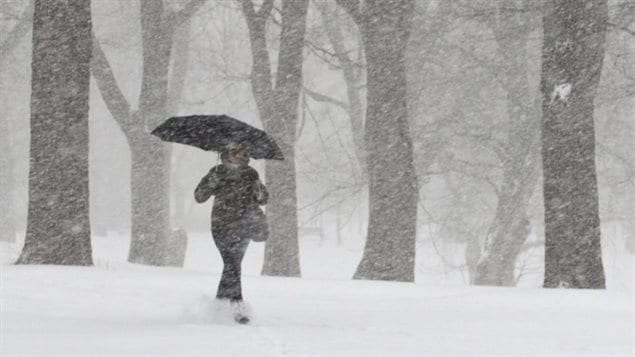 After an almost completely snow free season in southern Ontario Quebec and the maritimes, winter arrived with a bang yesterday and today
Photo Credit: via CBC

It was bound to come, but millions of Canadians were lulled into complacency by relatively mild weather so far this season. However, winter has suddenly arrived in Canada’s most populous areas, and with a good winter wallop.

Until this week, southern Ontario and Quebec had been virtually without any snow at all, and relatively mild temperatures often several degrees above normal for this time of year.

Yesterday a big winter storm crossed the province of Ontario last night and arrived in Quebec today before it heads eastward.

On its way it’s left anywhere from 15- 20 cm of snow blown by some brisk winds.

Although winter happens every year, and Canadians are good at coping, it seems every year the first major snowstorm always seems to catch people off guard.

There have been dozens of minor accidents throughout the two provinces

As for Montreal we haven’t seen the same situation which went viral last year…at least so far this year.