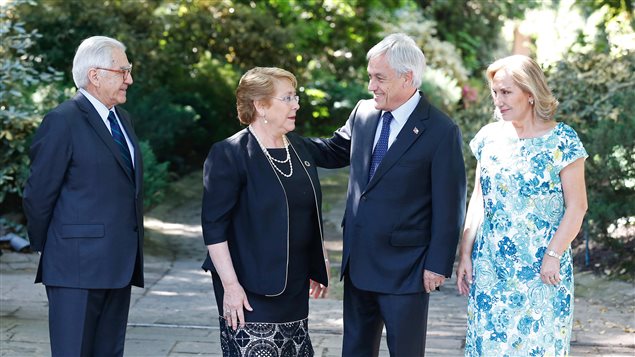 The Liberal government of Prime Minister Justin Trudeau extended its congratulations to Chile’s conservative President-elect Sebastián Piñera Monday as the South American country prepared to take a right turn away from the policies advocated by the outgoing centre-left administration of President Michelle Bachelet.

The 68-year-old billionaire and former president, who governed from 2010 to 2014, got 54.6 percent of the votes to 45.4 percent for centre-left Senator Alejandro Guillier in Sunday’s runoff election, winning more votes than any president since Chile’s return to democracy in 1990.

It was also the biggest ever loss for the center-left coalition that has dominated Chile’s politics since the end of Augusto Pinochet’s dictatorship.

In a joint congratulatory message to Piñera Foreign Affairs Minister Chrystia Freeland and International Trade Minister Francois-Philippe Champagne said the election was “a testament to the strength and dynamism of Chile’s democracy.”

“Canada and Chile enjoy a close relationship, including our strategic partnership agreement, and share common values such as equality, democracy and human rights,” said the joint statement.

“Together, we promote these common values abroad in the UN and other organizations and forums, including the Lima Group, which focuses on restoring democracy in Venezuela, and the Equal Rights Coalition, co-chaired by Chile and Canada.”

The two countries also have a strong trade and economic relationship through the recently modernized Canada-Chile Free Trade Agreement, the ministers said.

“We look forward to expanding this cooperation through ongoing negotiations for Canada to join the Pacific Alliance as an associated state,” the statement said.

Pinera’s victory underscores an increasing tilt to the right in Latin America following the rise of conservative leaders in Honduras, Peru, Argentina and Brazil. He is due to be sworn in on March 11.