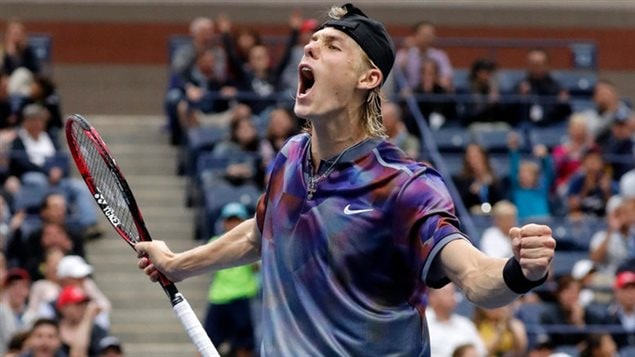 Denis Shapovalov had a wonderful year on the ATP tennis tour, making the semifinals in Montreal and the fourth round at the U.S. Open in New York. On Tuesday, Canadian Press awarded him the Lionel Conacher Award as Canada's 2017 male athlete of the year.
Photo Credit: AP Photo / Julie Jacobson

Shapovalov adds to his magical year, winning the Conacher Award

Denis Shapovalov, the hot-shot kid with the flowing locks and the gorgeous strokes, has been named by Canadian Press as Canada’s male athlete of the year, winner of the Lionel Conacher Award.

Shapovalov collected 31 per cent of the votes in a poll of broadcasters and sports editors from across the country, edging Pittsburgh Penguins captain Sidney Crosby by one vote.

Joey Votto of the Cincinnati Reds was third with 17 per cent of the vote.

Shapovalov had a wonderful summer season on the tennis courts, capturing the fancy of Canadians across the country when he made it to the semifinals at the Rogers Cup, Montreal’s Masters 1000 event in August.

He then moved on to the U.S. Open in New York, where he reached the fourth round, winning fans there with his stylish play and never-say-die approach.

Shapovalov, who doen’t turn 19 until April, started 2017 ranked 250th in the world and reached a high of No. 49 following his brilliant summer.

He ended the season ranked 51st.

It is the third time in five years the award has gone to a tennis player.

Milos Raonic, who remains Canada’s top-ranked player at No. 24 despite an injury-shortened season, won in 2013 and 2014.

(EDITOR’S NOTE: How far can Shapovalov go? We will have a full forecast of the 2018 professional tennis season on Wednesday with one of Canada’s top tennis journalists, Stephanie Myles, editor-in-chief of tennis.life)