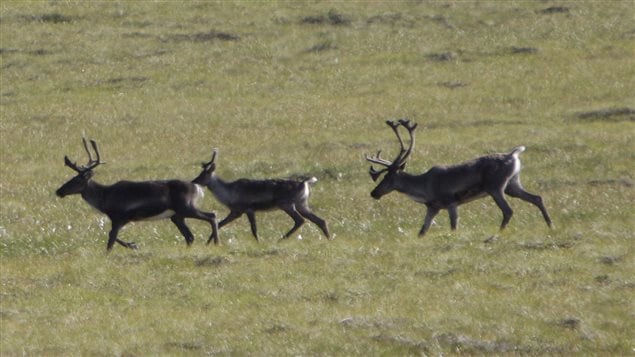 An aerial count of one the most important caribou herds in northwestern Canada and Alaska completed in July has shown a near doubling of its population, delighting conservationists and Indigenous communities that depend on the animals to supplement their diets.

The Porcupine caribou herd – a large migratory herd that usually ranges between Dawson City in the Yukon all the way up to the Arctic coastline of the Beaufort Sea in the Northwest Territories, Yukon and Alaska – numbers between 202,000 and 235,000 animals, said Mike Suitor, regional biologist for the North Yukon Region with Environment Yukon.

The herd usually calves in Alaska and then winters further south in Alaska, Yukon and the Northwest Territories.

“Currently the herd we’re estimating is about 218,000 caribou,” Suitor said in a phone interview from Dawson City.

(click to listen to the full interview with Mike Suitor)

It’s the highest number recorded since scientists started tracking the herd in the 1970s, Suitor said.

“It’s positive news for me,” said Joseph Tetlichi, chair of the Porcupine Caribou Management Board (PCMB), which consists of representatives of five self-governing First Nations as well as the federal government and territorial governments of Yukon and the Northwest Territories.

“It’s welcome news considering that the ten major herds across Canada are in decline mode.”

However, the welcome news is not going to change the harvest management plan signed by the PCMB members in 2010, Tetlichi said.

“It’s business as usual,” Tetlichi said. “We don’t have a commercial tag system so people cannot get a tag to commercially harvest these caribou for the sale of their meat or any parts of the caribou.”

Tetlichi said he was very proud of the job done by the PCMB and suggested the model used to manage the Porcupine caribou herd could and should be used in other parts of Canada.

“I think the reason the Porcupine caribou is doing well is cooperation between the First Nation communities working with territorial and federal governments,” Tetlichi said.

It’s not very clear what biological or environmental factors drive these cyclical increases and decreases in the numbers of the caribou, Suitor said.

“Particularly the last half-a-dozen years we’ve seen really good vegetation productivity, warm wet summers that have led to lots of green growth, which as you can imagine, that’s the primary food, so when you have good food, good conditions, the herd tends to do well.”

However, the more abundant numbers of the caribou don’t automatically mean that they are easier to harvest, Suitor said.

Very often the caribou herds don’t present themselves to the Dempster Highway that cuts northeast through the territory from western Yukon, said Tetlichi.

Unlike the old days, when Indigenous hunters followed the migrating herds on dog sleds, the rugged terrain makes it very hard for modern hunters to reach the herd on skidoos when they don’t come close to the highway, Tetlichi said.

“It really puts pressure on the user communities when that happens, when there is no caribou, because then they have to switch their diet to maybe fish or moose, or other different wildlife,” Tetlichi said. “The way the First Nations look at it, it’s one of the changes that are happening and we just have to accept the fact that there is no caribou this year.”

The biennial aerial survey is a collaboration between the Yukon government and the Alaska Department of Fish and Game, Suitor said.

And this year’s count was made more effective, thanks to a pair of newly acquired digital aerial camera systems installed on surveying airplanes, said Alaska wildlife biologist Nate Pamperin of Fairbanks.

The new digital systems each feature three medium-format 100-megapixel cameras in gyro-stabilized mounts with GPS and inertial measurement units to record position, pitch, roll, and yaw. The technology allows biologists to conduct photocensus work under low light conditions and to capture wider swaths of the terrain, he said.

“Our Western Arctic herd count would not have happened with film last summer because of poor light on the second day,” said Pamperin.

“In several other situations this year the larger ground swath of the new system allowed us to photograph large groups that were rapidly moving or widely scattered – situations that were problematic for the film systems.”

The digital cameras produce superior color images that can be inspected immediately for quality. In addition, new software enables individual images to be stitched together and georeferenced so that each caribou group can be viewed as a single image mosaic, he said.

In the past, researchers had to manually lay out printed photographs, delineate overlap, and determine which parts of each photo were to be counted. It was a tedious process that sometimes took weeks to accomplish, said Pamperin.