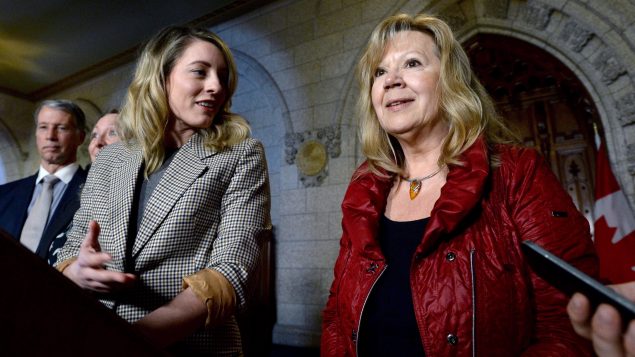 Minister of Canadian Heritage Melanie Joly recognizes Catherine Belanger, wife of late MP Mauril Belanger, who put forth the private member's bill to make the national anthem gender neutral. Bill C-210 received royal assent, during a press conference in the Foyer of the House of Commons on Parliament Hill in Ottawa today. The line "in all thy sons command" is now officially replaced with "in all of us command." CP/Justin Tang

O Canada, the revised edition was sung first by the Canadian Olympians in Pyeongchang early this morning during a flag-raising ceremony at the athletes’ village.

Then it was sung in Canada’s parliament.

“This is a wonderful day. My granddaughters and I are on cloud nine” 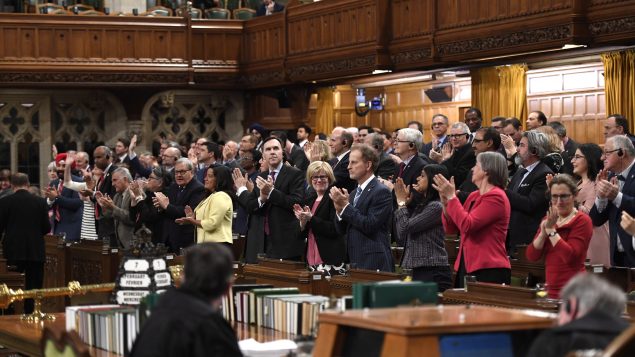 Liberal MPs rise for a standing ovation after Bill C-210 received royal assent, in the House of Commons on Parliament Hill in Ottawa tody. CP/Justin Tang

Joly, accompanied by Catherine Bélanger, the widow of the bill’s original sponsor, Liberal MP Mauril Bélanger who died of ALS in 2016, said the line “in all thy sons command” has now been officially replaced with “in all of us command.”

“His long advocacy for the subject has actually changed the course of our history. Now, women across this country will be well-reflected in their own national anthem,” Joly said.

“This is a wonderful day. My granddaughters and I are on cloud nine and I am sure Mauril is smiling,” Bélanger said.

Traditionally, Canada’s Members of Parliament sing the national anthem each Wednesday before the start of business

Melanie Joly said she would sing the new lyrics proudly, and she hopes opposition Conservative MPs will also sing the new gender-neutral anthem.

With files from CBC and CP

MPs sing the gender neutral version of O Canada.The line “in all thy sons command” has now been officially replaced with “in all of us command.”