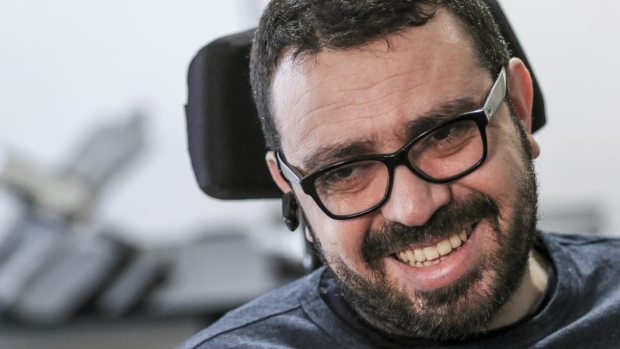 A crowdfunding campaign to find a new for Aymen Derbali, who lost use of his legs in last year's Quebec City mosque shooting has reached its $400,000 goal. (Maxime Corneau/Radio-Canada)

When a lone man armed with a rifle and a pistol walked into the Islamic Cultural Centre of Quebec City on Jan. 29, 2017 and opened fire, killing six worshippers and wounding 19 others, Aymen Derbali’s life changed forever.

Derwali, now 41, was shot seven times–two of the bullets lodging in his spinal cord, leaving him quadriplegic, paralysed from the chest down, able to move only his head, arms and hands.

He was kept in a medically-induced coma for two months with his wife, Nedra Zahousani, the mother of the couple’s three children, at his side 12 hours a day.

Since then Derbali has lived in a rehabilitation centre, confined to an electric wheelchair as the family wondered what do next, knowing their fourth-floor apartment would not be suitable for their family of five.

But last December something special happened.

The Canadian-Muslim non-profit organization DawaNet announced a crowdfunding campaign to raise $400-thousand to find a house that would meet the family’s special needs. 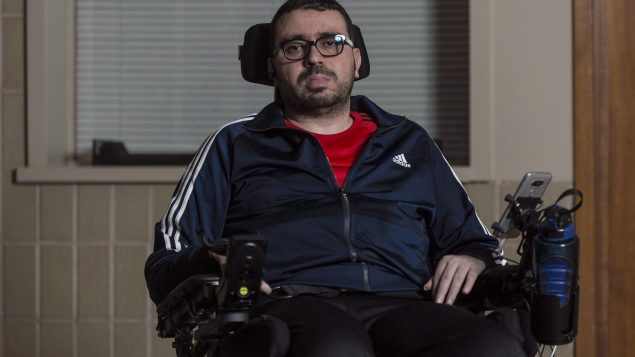 Aymen Derbali poses for a photo in Quebec City in December. Left paralized, he can only move his head, arms and hands is relearning how to navigate the world after the mosque shooting. (Francis Vachon/THE CANADIAN PRESS)

On Friday, DawaNet announced that with the help of $150-thousand from the Quebec government the goal had been met.

The search to find that house–the family’s new home–can now begin in earnest.

In announcing the drive, Amira Elghawaby, a DawaNet volunteer, said Derwali had been a hero–not just a victim–that horrible evening.

“Aymen had seen the shooter and he kind of went toward him. He wanted to stop him from shooting others and was hit seven times,” she told the CBC reporter Sabrina Marandola.

For his part, Derbali has expressed frustration with being unable to help more with his children but never any bitterness over the attack.

“I’ve always believed most Canadians believe in solidarity and want to live in harmony,” he told the Globe and Mail in December.

“I’ve never once regretted the day I asked for Canadian citizenship.”

The man who allegedly carried out the attack, Alexandre Bissonette, faces six counts of first-degree murder and six counts of attempted murder while using a restricted firearm.

With files from from CP, CBC, The Globe and Mail