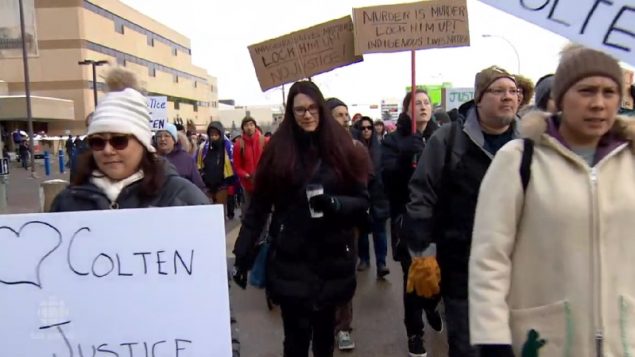 One of dozens of protests and vigils held by Indigenous groups across Canada protesting the "not guilty" verdict. PHOTO-CBC

In 2016, a man was shot and killed on a rural farm in the prairie province of Saskatchewan. The subsequent trial has made headlines all across Canada.

The man was Indigenous and what he and friends intended on the farm is not clear.  They admitted to having been drinking and trying to break into a truck on a neighbouring farm before driving into the Stanley farm allegedly to ask for help with a flat tire.

The farmer, Gerald Stanley was on trial facing a second degree murder or manslaughter conviction. The defence argued the shooting was accidental. The jury heard the evidence and declared Stanley not guilty.

This has created a storm of bitter protest by indigenous groups across the country many of whom were angrily demanding a verdict of guilty on the murder charge.

Michael Lacy (LLB) is president of the Criminal Lawyers Association of Ontario and partner in the law firm Brauti Thorning Zibarras LLP in Toronto. (we apologise for sound quality over a mobile phone) 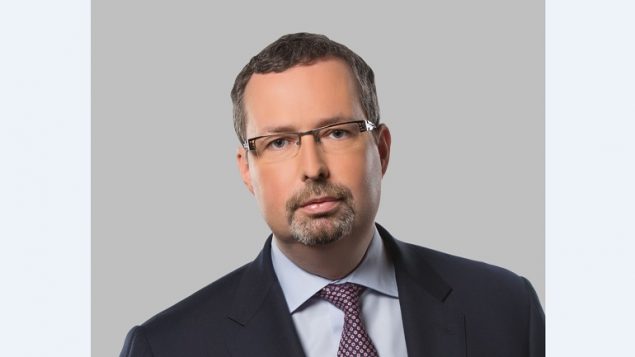 Michael Lacy is president of the Ontario Criminal Lawyers Association and partner in a Toronto law firm. PHOTO- supplied

In a tweet, the federal Justice Minister said, “My thoughts are with the family of Colton Boushie tonight. I truly feel your pain and I hear all of your voices. As a country we can and must do better – I am committed to working everyday to ensure justice for all Canadians”. Prime Minister Trudeau on a trip to the U.S. was interviewed on camera and also said of the verdict “we must do better”. 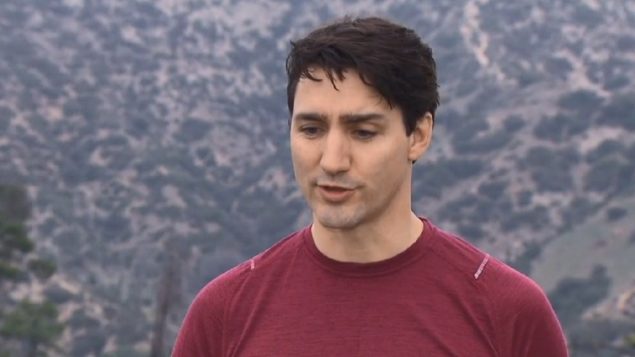 Interviewed while on a business tip to the U.S, Canada’s Prime Minister, Justin Trudeau also said of the not guilty verdict, “we must do better” which to some appears to be a criticism of the justice system. PHOTO: CBC

One of the major points being criticised by Indigenous groups is that there were seemingly no indigenous members of the jury.

Jurors are selected from the community where the case is heard. All that is known by either side are the names, profession, and how they look. As one expert said, we cannot be certain there were no indigenous members, just that none physically appeared to be indigenous.

Under the law, both the  Crown and defence can reject up to 20 potential jurors with not reason given. Jurors can also be rejected for other reasons by either side. 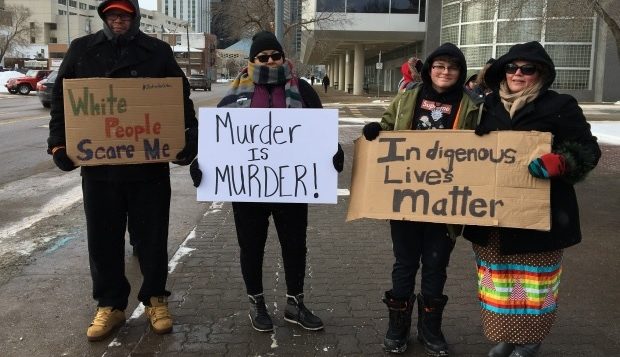 Indigenous protesters angered at the verdict say there was no justice done with the not guilty decision of the jury. The are calling for changes to how Indigenous people are treated in Canada’s justice system. PHOTO: CBC/Alicia Asquith

Michael Lacy in a comment sent to RCI “Politicians have no business at all in weighing in on the correctness of a verdict.  Particularly where it doesn’t appear there was any legal error infecting the judgment of the Jurors.  When the prime minister or the attorney general weigh in, it undermines the independence of the judicial branch.   It is also naive and suggests politicking rather than reasoned appropriate response from the leader of the country and the most senior legal officer of the land.  They were not present in court. They did not hear the evidence. They were not the Triers of fact.  We don’t abandon fundamental principles of law to direct a more palatable outcome that will be better received by the uninformed.  If they limited their concerns or outreach to the heaviness being felt by the family that suffered the tragic loss of life that would not be problematic.  Even a non-culpable accidental death is awful and we can all sympathize with the family who had to endure this tragedy. Saying anything that amounts to commenting on the correctness of the verdict to improve your public image or ensure an appropriate approval rating should be criticized in Canada just as we do when President Trump does it in America.  Shame on them if they did.
”

Several marches and protest demonstrations have been held across the country calling the not guilty verdict “racist”.  Members of the Colten Boushie family and Indigenous leaders are meeting  with federal politicians today and tomorrow to discuss the case.