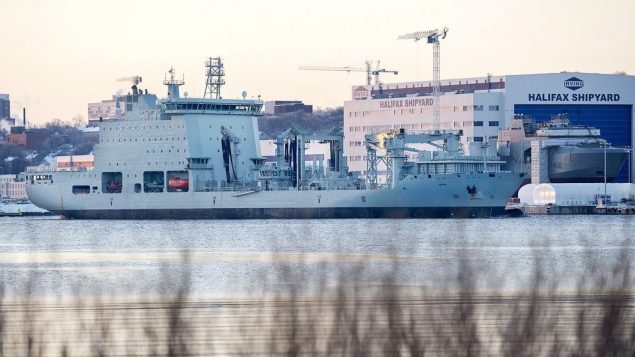 MV Asterisk, the Royal Canadian Navy's new supply ship, is seen in the harbour in Halifax on Friday, Jan. 19, 2018. While the RCN is eager to start using the newest addition to Canada's fleet, a senior officer says the vessel has some key limitations notably that it can't be deployed into war zones. PHOTO: Andrew Vaughn- Canadian Press

Any bluewater navy needs resupply ships to keep its fighting vessels going.  Canada had three at one point, then two, and then as they were retired, by 2014 there were none. 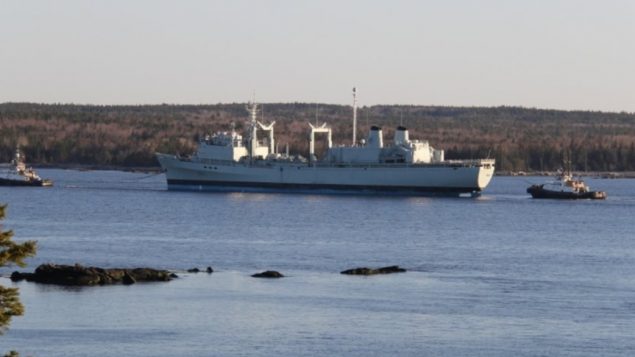 HMCS Protecteur, commissioned in 1969, but plagued by electrical problems and a serious engine fire, was decommissioned in 2015 and shown here on her final trip being towed to the breakers in Nova Scotia in April 2016 PHOTO- courtesy Dr Ross Myers

Since 2014, Canada rented supply ships from Chile and Spain. While that was happening a stopgap solution was created when a former cargo vessel, the MV Asterix, underwent a complete transformation into a re-supply ship.

The Royal Canadian Navy (RCN) accepted the ship in January after sea trials, and the ship is now undergoing final touches of additions of some weapons and various high-tech equipment.

However, the ship doesn’t actually belong to the Navy.

It’s leased for five years, with another five year option and although about 45 RCN members will be aboard for naval resupply duties, the captain and crew of 30 who actually sail the ship, are civilians.

While Canada isn’t currently operating in any conflict zones, the fact is that the ship won’t be allowed to operate in any “dangerous” environments.

This not only excludes servicing RCN warships in conflict zones, but the civilian captain can also decide not to operate or perform tasks if its decided the seas are too rough, or visibility is too low.

Two actual Navy supply ships are currently being built on Canada’s west coast which will have better defence, better electronic systems, and better survivability than Asterix.

With modifications to suit RCN needs, the new JSS vessels will be based on the German “Berlin” class ship. PHOTO: Wiki Commons

Traditionally, Canada had supply ships on both coasts to serve the Maritime and Pacific fleets, but the Liberal government rejected an offer from the Davie shipyard which built Asterix, to complete a second converted supply ship.

The two proposed purpose-built Naval ships labelled “Joint Support Ships” will be multi-role vessels capable of fuel delivery at sea as with the previous auxiliary vessels, but also have sea-lift space  and capacity to store up to four helicopters, as well as a command role capability if needed, and some ice-edge capability to operate in limited northern areas.

Originally proposed in 2004, delays have meant the first ship won’t be available until at least 2021 and the second in 2022 at a cost of over $2 billion. Experts say however that those dates are “optimistic”