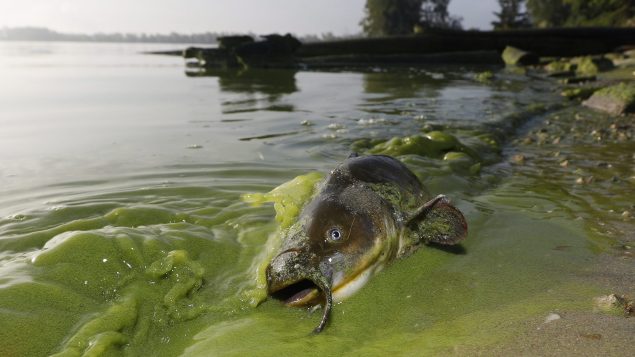 This Sept. 20, 2017 photo shows a catfish on the shore on Lake Erie in an algae bloom that was one of the largest in recent years. (Andy Morrison/The Blade via AP)

Huge algae blooms have for years created a toxic slime on one of the Great Lakes at the heart of North America. It can make people sick, kill fish and other aquatic life and make drinking water unsafe for human consumption.

Lake Erie is the most shallow and most biologically productive of the five lakes. They provide drinking water to millions of people in Canada and the United States and are important for recreation, transportation, power and economic opportunities.

Plan to cut phosphorus by 40 per cent

The excessive growth of algae is mostly caused by phosphorus from sources like agricultural lands, urban centres, sewage treatment plants and septic systems. The governments of Canada and the province of Ontario have announced more than 120 “federal, provincial and partner actions, using mandatory and voluntary approaches, to help achieve the goal of reducing phosphorus entering Lake Erie by 40 per cent.”

Among the environmental groups applauding the plan is Ducks Unlimited Canada. It will be involved in the plan to increase wetlands which will help intercept phosphorus heading into Lake Erie.