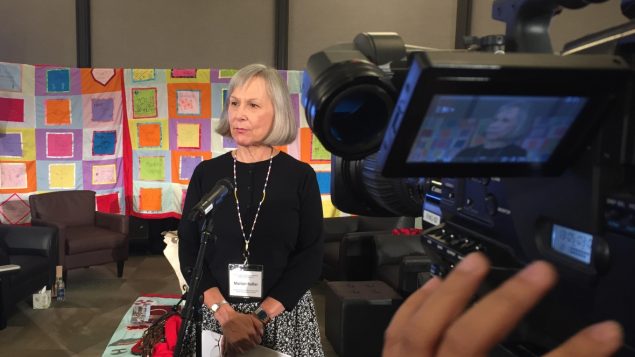 MMIWG inquiry chief commissioner Marion Buller addressing the media during the Winnipeg community hearing in October. Yesterday, she said the inquiry needs a two-year extension 'to do justice to our critically important mandate.' (Jillian Taylor/ CBC)

MMIWG, the acronym for the inquiry into the estimated 1,181 missing and murdered indigenous women and girls in Canada is underway.

The inquiry is stopping into community after community in an effort to understand why Indigenous women are statistically five times more likely to die by violence than other women in this country.

Since it began, on September 1st, 2016, 763 witnesses have shared their stories at 134 public hearings, according to a news release.

For a variety of reasons, another 103 people testified in-camera at 11 community hearings, and hundreds more have registered. 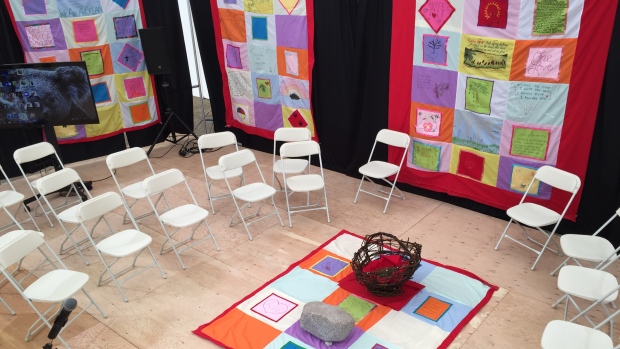 Quilts decorated with messages of hope and encouragement hang inside a tent in Whitehorse for the national inquiry into missing and murdered Indigenous women and girls on Dec. 1, 2017. (Philippe Morin/CBC)

Now the inquiry is asking for a two year extension, with $50 miilion more, in funding to continue.

In an interview on CBC News Network yesterday, Marion Buller, the inquiry’s chief commissioner, explained why:

“We want to have more time to delve into issues such as human trafficking, the role of legislation in creating systemic discrimination, we also want to look at health care, addictions, child welfare,: Buller said, adding, “I hate to tell you, the media as well, and how indigenous women are portrayed in the media.”

“We don’t want to do a superficial job.” she said, “We want to look very closely at policing, for example, all across Canada.”

Marion Buller acknowledged the “start-up” issues, saying it took nine months just to get up and running. And the staff turnover has been a growing concern.

Francyne Joe, head of the Native Women’s Association of Canada supports the request for an extension.

“I do believe that the two year time frame that was first provided for this national inquiry was not enough time, nor was the funding enough. Joe said.

“I think as soon as the commissioners had a work plan, such as what they provided last month, they should have been able to come back to the government and say, ‘this is what we actually need in order to do a successful inquiry that incorporates all of the families and all the testimonials that we need.”

Joe says the work of the inquiry so far is beginning to make inroads: “Knowing that the first thing they can do to stop violence is to say something, has started to prove to women that we care about them.”

But Sandra DeLaronde, co-chair of the MMIWG Coalition in Manitoba, is critical of the current process. She said families in her region who testified at the inquiry are still waiting for aftercare.

As she told CBC News, she hopes this will change if the inquiry is granted the extension.

“It’s unlike the Truth and Reconciliation Commission, where people told their truth in terms of something that had occurred in their life, whereas this issue  something that’s real, immediate and ongoing.”

This week the inquiry is hearing from families in Nain, Labrador, a place where isolation is one factor in a rate of violence against women that is seven times the national average.

“Whatever time it takes, do it right”, that’s what Marion Buller was told in one hearing setting. “I’ve waited over 40 years for this.” another woman told her.

The government has not responded yet.