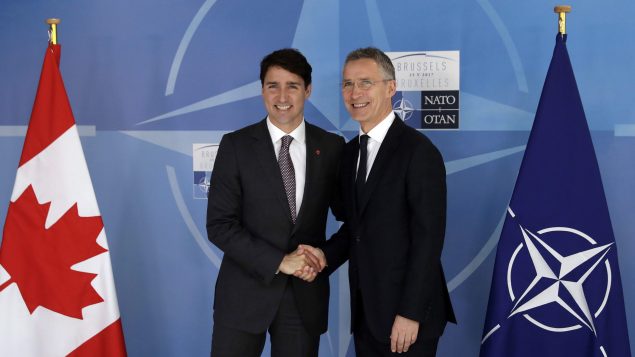 NATO Secretary General Jens Stoltenberg arrived in Canada Tuesday for a two-day visit that will include meetings with Gov. Gen. Julie Payette and Prime Minister Justin Trudeau, as well as other high-ranking officials.

On Wednesday, Stoltenberg will participate in a Town Hall event at the University of Ottawa, delivering remarks and taking questions from students, according to a press release by the NATO’s press service.

Stoltenberg will also attend a reception hosted by the NATO Association of Canada and the NATO Parliamentary Assembly, marking the 69thanniversary of the alliance, the press release said.

He will also meet Canada’s top soldier Gen. Jonathan Vance, Chief of the Defence Staff, as well as other senior officials, the statement said.

Stoltenberg’s visit to Canada comes amid heightened tensions with Russia over allegations that the Kremlin is behind the poisoning of former Russian military intelligence officer recruited by Britain Sergei Skripal and his daughter Yulia, who were attacked with a nerve agent on March 4 in Salisbury.

The Kremlin has denied any involvement in the attack on Skripal, who was convicted and jailed for betraying several Russian spies in Britain before he was transferred to the United Kingdom in a spy swap.

Russia has demanded access to the British investigation, pointing out that Yulia Skripal is a Russian citizen who lives and works in Russia. At the Kremlin’s request the Organisation for the Prohibition of Chemical Weapons (OPCW) will hold a special session on Wednesday in the Hague on the Salisbury poisoning.

“We have raised 20 questions for discussion (at the meeting). I hope that during this discussion a final line on what has happened will be drawn,” Russian President Vladimir Putin told a news conference during a visit to the Turkish capital Ankara.

Origin of nerve agent not clear

The meeting in the Hague comes as scientists at a top British military research laboratory in Porton Down admitted that they have not been able to establish where the nerve agent used to poison the Skripals was made.

Gary Aitkenhead, chief executive of the Defence Science and Technology Laboratory (DSTL) at Porton Down, told Sky News they were not yet able to prove it was made in Russia.

“We have not identified the precise source, but we have provided the scientific info to Government who have then used a number of other sources to piece together the conclusions you have come to,” Aitkenhead told Sky News.

However, Aitkenhead said the substance required “extremely sophisticated methods to create, something only in the capabilities of a state actor”.

Western governments have blamed Russia for what Canadian Foreign Affairs Minister Chrystia Freeland has described as a “despicable, heinous and reckless act, potentially endangering the lives of hundreds.”