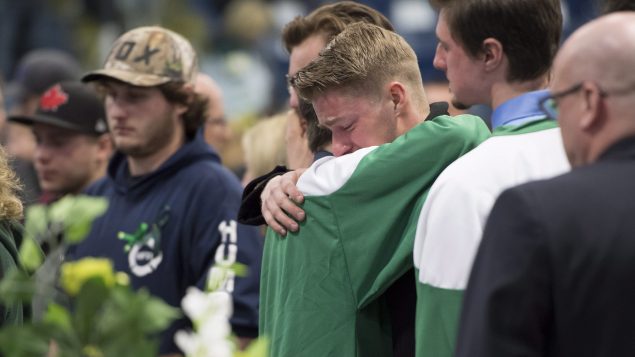 Mourners comfort each other during a vigil at the Elgar Petersen Arena, home of the Humboldt Broncos, to honour the victims of a fatal bus accident in Humboldt, Sask. on Sunday, April 8, 2018. (Jonathan Hayward/THE CANADIAN PRESS)

Thousands of people gathered in the small Saskatchewan town of Humboldt on Sunday to mourn 15 people who died when a bus carrying members of the local junior hockey team collided with a truck late last week.

Another fourteen people were injured, two of them critically, when the bus with 28 members of Humboldt’s Broncos hockey team collided with a semi-trailer at an intersection of two prairie highways near Teasdale, Sask., about 200 kilometres north of the provincial capital Regina.

Most of the victims were between the ages of 16 to 21 years old.

The team chaplain who happened upon the gruesome scene and heard sounds of the dying and injured recalled the horror and powerlessness he felt that night.

“We travelled up and arrived at the scene … and walked up on a scene I never want to see again,” Pastor Sean Brandow told a vigil held Sunday night in the Bronco’s home arena. “To sounds I never want to hear again.”

Brandow said he watched emergency crews work feverishly to save those they could and then visited the victims in the hospital. 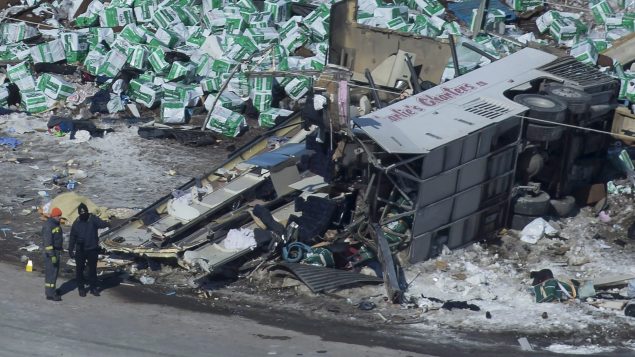 The wreckage of a fatal crash outside of Tisdale, Sask., is seen Saturday, April, 7, 2018. A bus carrying the Humboldt Broncos hockey team crashed into a truck en route to Nipawin for a game Friday night killing 15 and sending 14 others to the hospital. (Jonathan Hayward/THE CANADIAN PRESS)

“To go to the hospital and walk around and just hear groaning and panic and fear and distress and pain and just nothing but darkness,” he said.

“To sit and hold the hand of a lifeless body … This is the valley of darkness. All I saw was darkness and hurt and anguish and fear and confusion. And I had nothing. Nothing. I’m a pastor, I’m supposed to have something.” 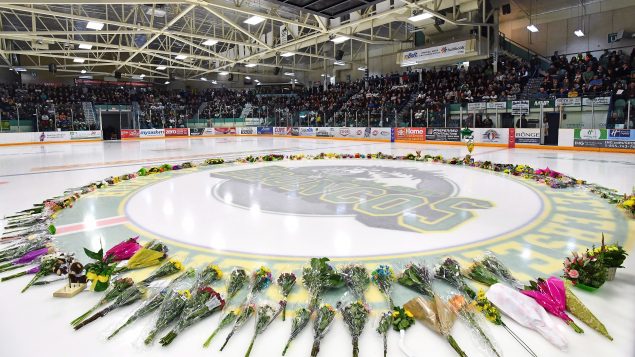 Flowers lie at centre ice as people gather for a vigil at the Elgar Petersen Arena, home of the Humboldt Broncos, to honour the victims of a fatal bus accident in Humboldt, Sask. on Sunday, April 8, 2018. (Jonathan Hayward/THE CANADIAN PRESS)

Brandow encouraged those gathered to lean on their faith as they struggle to deal with the tragedy.

People laid flowers in a circle around centre ice in the rink at the Elgar Petersen Arena as family and friends of players listened to prayers and hymns.

The vigil was attended by Prime Minister Justin Trudeau along with Saskatchewan Premier Scott Moe and other dignitaries. Trudeau visited survivors of the crash in a Saskatoon hospital earlier in the day. 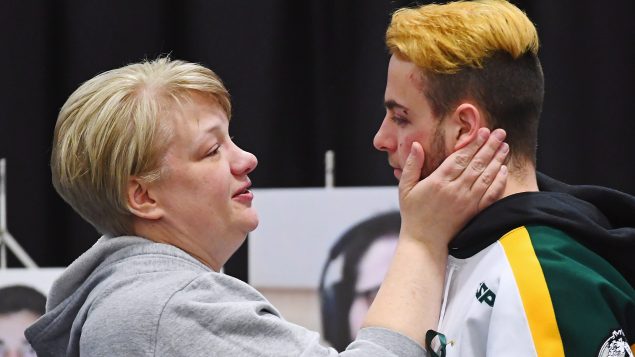 Humboldt Broncos’ Nick Shumlanski, who was released from hospital earlier today, is comforted by a mourner during a vigil at the Elgar Petersen Arena, home of the Humboldt Broncos, to honour the victims of a fatal bus accident in Humboldt, Sask. on Sunday, April 8, 2018. (Jonathan Hayward/THE CANADIAN PRESS)

In the meantime, a spokesman for Saskatchewan’s Ministry of Justice said authorities mixed up the identities of one of the deceased and one of the survivors of the crash, partly because the players all had blond dyed hair and similar builds.

Drew Wilby says the coroner’s office mistook the body of 18-year-old goalie Parker Tobin for that of Xavier Labelle, who is injured but alive.