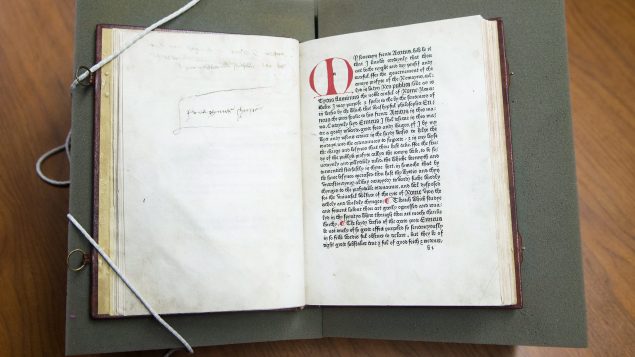 William Caxton's 1481 printing of Cicero, which is Canada's oldest printed book in English, is shown at the University of Toronto's Thomas Fisher Rare Book Library in Toronto on April 20, 2018. (Nathan Denette/The Canadian Press)

The University of Toronto is celebrating the acquisition of what is thought to be the oldest English-language book in Canada. The book, referred to as the Caxton Cicero, was printed in 1481 and is the library’s 15 millionth item.

The book is a translation of three texts including Cicero’s treatise on friendship and treatise on old age. It was published by William Caxton, a merchant who is believed to have brought the printing press to England in 1476. He printed 108 books in all. 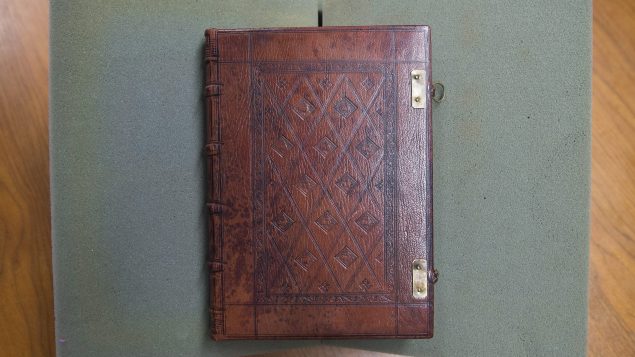 The Caxton Cicero was given a new binding in the 1980s. It was crafted with leather darkened by carbon. (Nathan Denette/The Canadian Press)

The paper used at this time was made of linen and often was recycled undergarments reconstituted as paper, said Pearce Carefoote, interim head of rare books and manuscripts at the university’s Fisher Library. The binding was made in the 1980s by a craft binder in Britain who fashioned it in a style “sympathetic” the 15th century.

Old books are often identified by their type with each printer making his own out of lead. This book will be available to scholars who study book history, classics, medieval studies and history. It will also be digitized to provide access to researchers around the world.