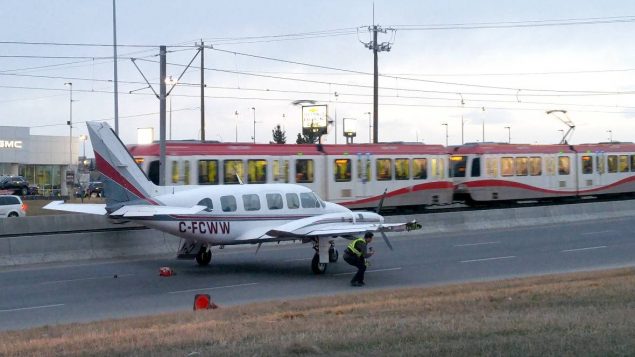 A small aircraft carrying six people was forced to make an emergency landing on a Calgary street this morning after running out of fuel, according to Calgary police.

Officials with Canada’s Transportation Safety Board (TSB) said the twin-engine plane with two crew members and four passengers on board landed on a two-lane stretch of 36th Street, between the 12th and 16th Avenue N.E. about five kilometres south of the airport near the Trans-Canada Highway.

No one was injured when the aircraft landed shortly before 6:00 a.m. MT.

The TSB is dispatching two investigators to look into the emergency landing, said Alexandre Fournier, a spokesperson of the federal agency.

The investigators are expected to arrive in Calgary later this morning, Fournier said.

Calgary police said plane was coming in this morning from the south, heading for a landing at the Calgary airport, when the pilot radioed in that the aircraft was running low on fuel.

Sgt. Duane Lepchuk, a police spokesman, said there was minimal traffic on the street at the time and there are no reports of drivers having to swerve to miss the plane.

The PA-31-350 Piper Navajo Chieftain is registered to Super T Aviation, based in Medicine Hat, Alberta, about 266 kilometres southeast of Calgary.

The plane left Medicine Hat, Alta., about 4:45 a.m. and was headed to Calgary, a company official told CBC News.