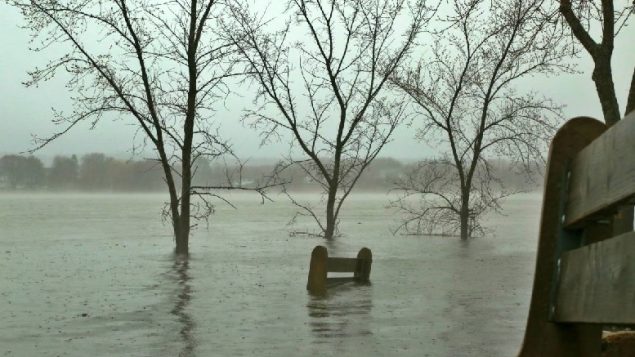 The St John River in New Brunswick near Fredericton is at 8 metres and with rain still falling, may go higher and rival record floods of 2008. Photo:Alex Vietinghoff/CBC

From New Brunswick in the east, Quebec, the central province of Alberta, to west coast British Columbia, spring rain and melting winter snow have created huge swaths of flooding.

In several cases, frozen river ice which has been broken up, flows downstream until an ice jam forms backing up the waters which flood into nearby properties. 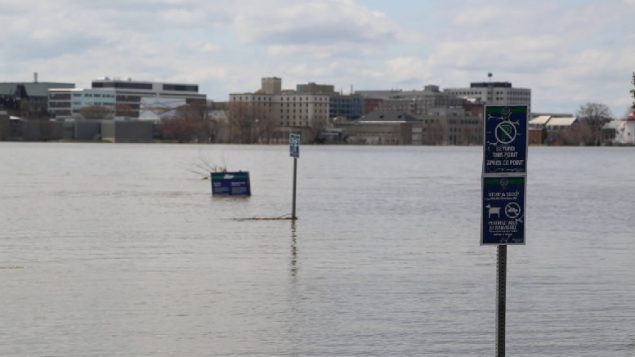 Flooding in Fredericton has inundated what is normally the large Carleton Park. Photo:.Philip Drost-CBC

In New Brunswick the St John river has reached high levels and forced closures and evacuations. Several government offices and some businesses in the city are closed today to reduce traffic problems.

In Alberta, several communities have been evacuated due to high water.

Many towns in several areas in Alberta, especially along the Peace River are threatened. Fort Vermilion in the north of the province has been ordered evacuated today. 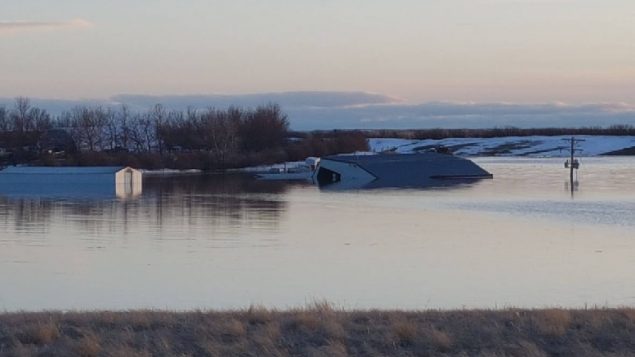 In Quebec, where extensive flooding last year caused great expense and hardship not far from Montreal,  some 24 areas are being watched now.  Evacuations have taken place in the Beauce and Gaspe and several other locations have received evacuation warnings, such as Weedon in the Eastern Townships. 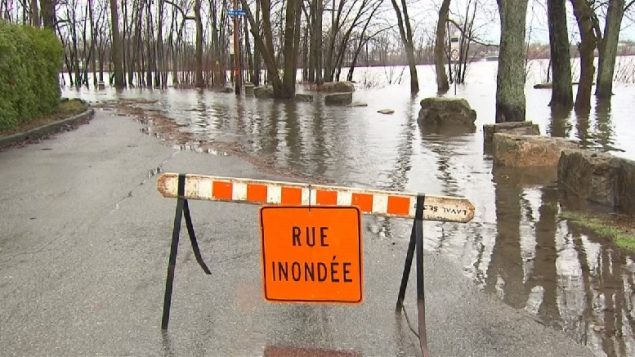 Minor flooding so far has closed some streets in the western part of Laval, Quebec. In many places across the province, the ground is saturated and the water absorption is at a minimum. Last year flooding on the western area of Montreal and nearby caused extensive damage. Photo: Radio-Canada

Several areas in British Columbia, especially the central interior, have been affected, with some evacuations as well, as some roads have been washed out.

Cache Creek, where the town fire chief was swept away by floods last year, is again experiencing flooding this year and is under a local state of emergency, although water seems to be receeding after a peak on the weekend. 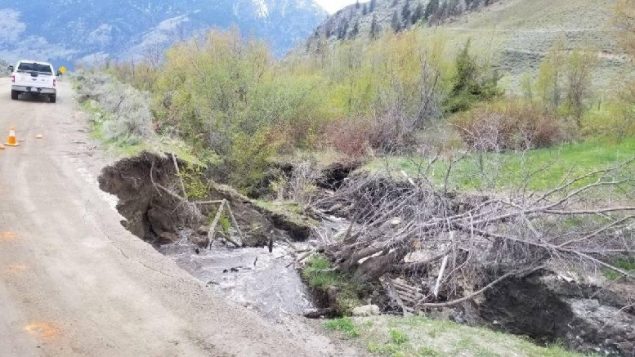 Flood waters undermine roads in B.C. Flooding near Cawston, B.C., has prompted the Regional District of Okanagan-Similkameen to issue a local state of emergency. Photo: RDOS/Twitter

Williams Lake, Quesnel, and Merritt are also vulnerable. Several homes near Oliver were evacuated due to threats of mudslides, and several dozen homes in Tulameen were also ordered evacuated.

Last summer several major wild fires devasted large portions of forest and so much of the rain and snow melt is not being absorbed and merely runs off creating floods and risk of mudslides.

In many of these areas the flooding is coming earlier than usual. Southern Ontario which tends to have slightly warmer climate experienced severe flooding in late February with at least one death as a child was swept from a car which was pushed into the fast flowing Grand River which had overrun the road.