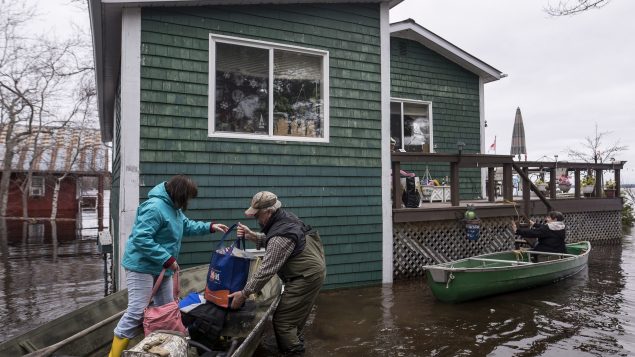 Residents carry groceries and clothes out of canoes as floodwaters surround a home on Grand Lake in New Brunswick on Tuesday, May 1, 2018. THE (Darren Calabrese/CANADIAN PRESS)

Authorities in the Maritimes province of New Brunswick have put residents of several communities in the St. John River basin on high alert due to rising flood waters, especially downstream from Fredericton.

The Emergency Measures Organization (EMO) in New Brunswick says residents of Jemseg, Gagetown, Hampstead, Belleisle, Grand Bay-Westfield, Quispamsis, Oak Bay and Saint John, as well as smaller communities in these respective regions, should be on high alert and ready to evacuate at a moment’s notice due to rising floodwaters that could surpass record-setting water levels in 1973.

“We’re looking at the worst flood in 50 years,” EMO spokesperson Geoffrey Downey told Radio Canada International. “There is a number of communities along the river, all of them south of Fredericton right now where the river is rising.”

(click to listen to the interview with Geoffrey Downey) 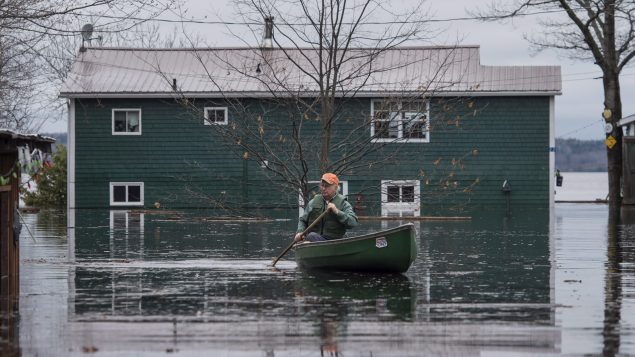 A man paddles in front of a flooded home on Grand Lake, N.B. as floodwaters continue to rise from the Saint John River on Tuesday, May 1, 2018. (Darren Calabrese/THE CANADIAN PRESS)

The water levels on the northern stretch of St. John River between Edmundston and Fredericton remain very high but stable, Downey said.

“In the southern part of the St. John River basin the river is rising and is scheduled to break probably some flood records if it hasn’t done so already,” Downey said.

The city of Saint John issued a voluntary evacuation notice Tuesday evening for residents near Westfield Road, the Randolph Bridge, Beach and Ragged Point roads, as well as any isolated areas along the St. John River within city limits.

The notice affects an estimated 1,900 people. 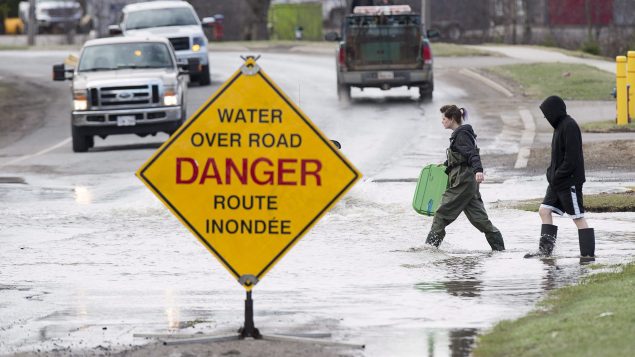 Local residents head to check on their house surrounded by the waters of the St. John River in Fredericton, N.B. on Sunday, April 29, 2018. Swollen rivers across New Brunswick continued to rise over the weekend, flooding streets and properties and forcing people from their homes in at least four communities. (Andrew Vaughan/THE CANADIAN PRESS)

“I just urge people to heed the warnings and know that it is very difficult to get people out in the middle of the night … it can be quite dangerous for first responders,” said Saint John Mayor Don Darling.

Water levels along the Saint John River are expected to continue to rise through the week, isolating homes and leading to further road closures, Downey said.

NB Power has also turned off electricity to about 104 customers for safety reasons.

Downey said more than 30 homes had been evacuated so far, affecting about 100 people.

That number is expected to rise around Saint John, he said.

“Right now what we are telling everyone who lives from Maugerville down to Saint John is to be on high alert,” Downey said. “If they’re used to experiencing flooding, it’s going to happen again. It’s not a question of if, it’s a question of when.” 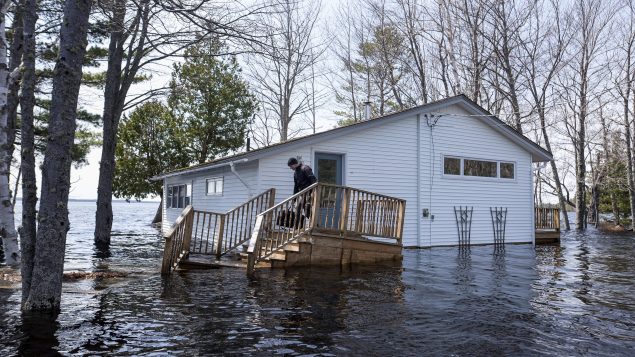 Downey urged residents to empty their basements, get out all the valuable possessions, take their pets, and have a backpack ready with medications, clothing and identification to evacuate at a moment’s notice.

Water levels were at about five metres in Saint John and could reach 6.6 metres by Sunday, exceeding the 2008 flood level by over a meter, he said.

Downey said the record for Maugerville was 7.11 metres of water and the forecast is calling for 7.1 metres, while in Jemseg the forecast was for 6.7 metres Thursday which would surpass the record of 6.36 metres in 1973. 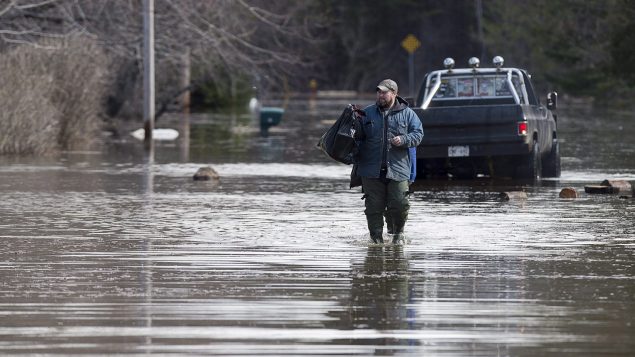 A home owner heads from checking his property surrounded by the waters of the St. John River in Fredericton, N.B. on Sunday, April 29, 2018. (Andrew Vaughan/THE CANADIAN PRESS)

There is rain in the forecast and snow in the north, which is expected to make the situation more dire in the coming days. Much of the sitting water also won’t recede quickly, he said, adding that the Fredericton area has been at about eight metres since late last week.

The floods have already damaged several roads in the affected area but it’s hard to assess the extent of the damage because these roads are still covered by water, Downey said.

“Specifically in the south we’re looking at potentially unprecedented flooding so we’re not sure what kind of an impact it’s going to have on the roads,” Downey said. “We may end up with water in places we’ve never seen before.”