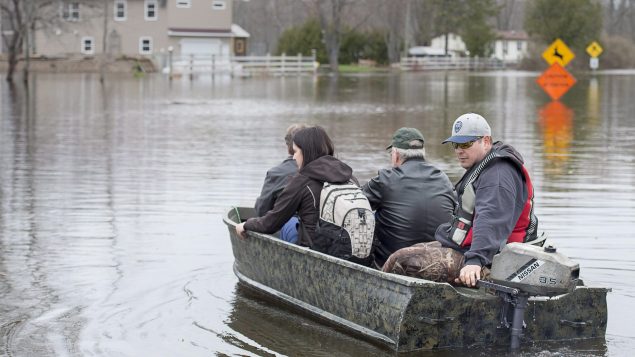 Residents are ferried home at Darlings Island, N.B. on Thursday, May 3, 2018 as the Kennebecasis River flooded the only road into the community. Swollen rivers across New Brunswick are still rising, flooding streets and properties and forcing people from their homes in several communities. (Andrew Vaughan/THE CANADIAN PRESS)

The government of New Brunswick has asked for assistance from the Canadian Coast Guard to help the province deal with the worst spring floods in over half a century, Premier Brian Gallant announced Thursday.

“It is clear that due to flooding there will be houses and families isolated. We will be managing a long and complex event, and we will need to support New Brunswickers in many ways,” Gallant said in a statement. “We are therefore taking steps to increase our capability for marine operations. We have requested assistance from the Canadian Coast Guard.”

The federal government has approved the province’s request and will help provincial authorities reach out to those who’ve been hit the hardest by the record breaking floods that show now sign of abating, Gallant said.

We are thinking about the residents in #NewBrunswick affected by the flooding. Our crews have been mobilized and are ready to assist those who are impacted. Thank you Marc Guitard for these impressive shots of downtown where the St. John River overflowed #SafetyFirst #NBFlood2018 pic.twitter.com/HhFpcM7pK4

“We are pleased to be able to help in any way we can with flood relief efforts,” said Dominic LeBlanc, federal Minister of Fisheries, Oceans and the Canadian Coast Guard. “The safety and security of New Brunswickers is a top priority for our federal government.” 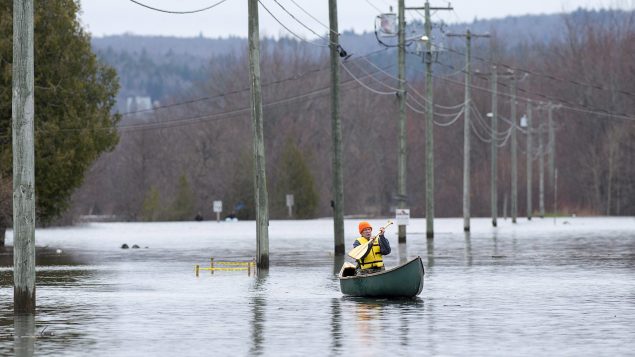 A resident paddles his canoe at Darlings Island, N.B. on Thursday, May 3, 2018 as the Kennebecasis River flooded the only road into the community. (Andrew Vaughan/THE CANADIAN PRESS)

The New Brunswick Emergency Measures Organization and the Canadian Coast Guard are working together to determine the details of the coast guard’s involvement, Gallant said.

“Our first priority is life-saving assistance,” said Gallant. “We will evacuate people who are unable to evacuate safely, and for those who remain behind, we will ensure that emergency medical service is available and that officials can support those impacted.”

On Thursday evening, provincial authorities were forced to close down the main highway connecting the province to Quebec and Nova Scotia.

Tanya Greer, a spokesperson for the New Brunswick Department Transportation, said the Trans Canada Highway remains closed and there is no word yet when authorities will be able to reopen it.

“It will all depend on the weather,” Greer said in a phone interview. 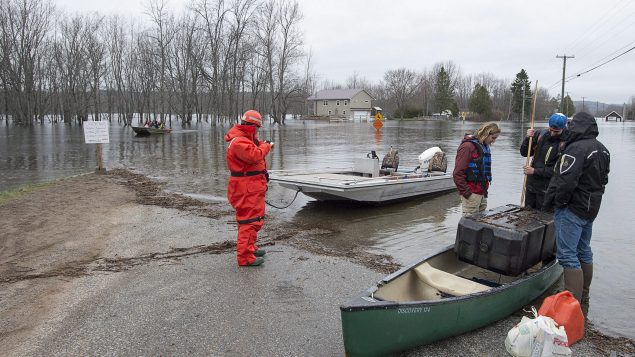 Residents stage at water’s edge at Darlings Island, N.B. on Thursday, May 3, 2018 as the Kennebecasis River flooded the only road into the community. (Andrew Vaughan/THE CANADIAN PRESS)

Geoffrey Downey, a spokesperson for the New Brunswick Emergency Measures Organization, said there is still a lot of snow in the north of the province and the snowmelt continues to feed the spring flood even if in recent days temperatures have cooled somewhat from the unseasonably hot weather at the beginning of the week.

The province can also expect between 20 and 30 mm of rain in the north.

In the central part of the province, about 15 to 25 mm are expected, with 10 to 20 mm anticipated in the south.

Provincial authorities urge New Brunswickers whose road access is cut off or about to be cut off to evacuate until the water recedes.