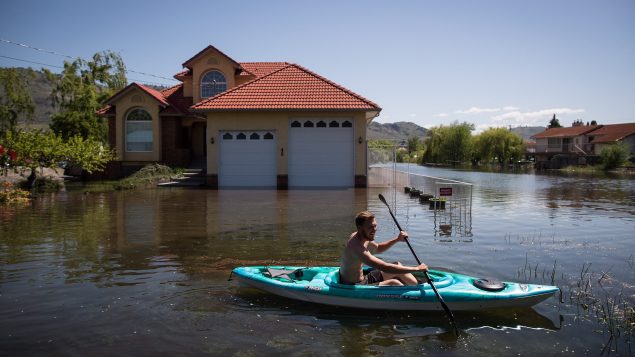 Bryson McKinnon paddles a kayak past a home surrounded by floodwaters in his neighbourhood, in Osoyoos, B.C., on Sunday, May 13, 2018. The Regional District of Kootenay Boundary says about 3,000 residents remain on evacuation order due to the ongoing threat of a second flood, with high forecasted temperatures expected melt snow at higher elevations. (Darryl Dyck/THE CANADIAN PRESS)

Parts of southern British Columbia are bracing for a second wave of flooding after record water levels hit the area last week.

Nearly 2,000 people had been ordered to evacuate from their homes by Monday and another 2,600 were on alert, ready to leave if things take a sudden turn, according to the B.C. River Forecast Centre.

Following consecutive days of heavy rain in the area and warm sunny weather in the forecast coupled with plenty of snow left in the mountains to melt, several rivers are forecast to rise above the 100-year level by Friday, bringing another surge of flooding to the region.

The Regional District of Central Kootenay (RDCK) has issued an evacuation alert for residents and visitors of Salmo, due to the potential danger from rising waters on Erie Creek expected later this week.

“We have concerns that the Salmo dike on Erie Creek could potentially flood over the top or fail, and we are issuing this alert to ensure residents and visitors in the area are prepared to evacuate if required,” said in a statement Andrew Bellerby, the RDCK Emergency Operations Centre (EOC) Director.

“Engineers are assessing the dike so we should know more about the situation soon. We are already in the process of mitigation work, and we have ordered extra sandbags for homeowners who need them.” 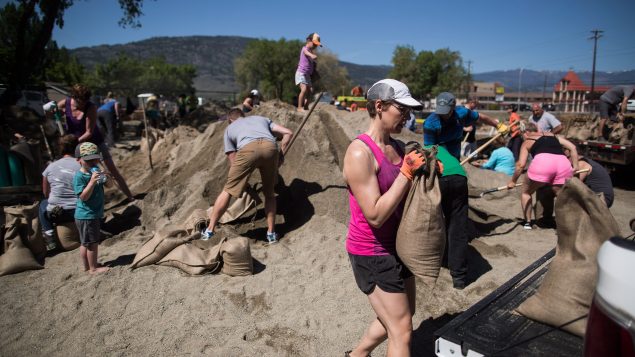 Volunteers fill sandbags for residents to protect their homes from flooding, in Osoyoos, B.C., on Sunday, May 13, 2018. (Darryl Dyck/THE CANADIAN PRESS)

In Grand Forks, which was one of the worst-hit areas last week, the Granby River is expected to hit the 100-year mark on Friday and forecasters are predicting the next round of flooding could be just as bad as last week.

The Regional District of Okanagan-Similkameen has issued evacuation alerts for more than 1,300 properties, and properties in Keremeos, Cawston and Osoyoos are expected to be especially hard hit.