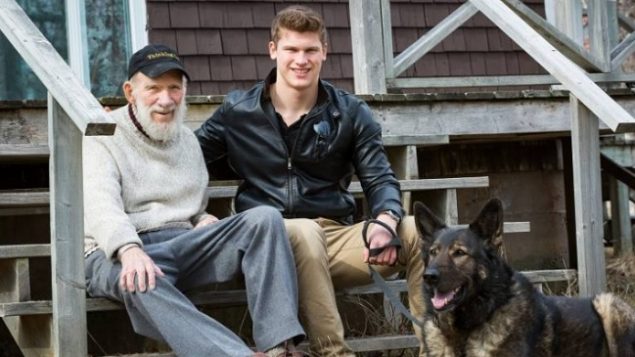 Lloyd Stone is now 90 years old, recovered from a broken hip and grateful to Calvin Kutchta and his dog, Arik. (Submitted by Purina)

There are not that many but yes, some Canadians do cross-country ski at the age of 89 and even older. But as can happen, octogenarian Lloyd Stone took a fall on March 3, 2017 when he hit an icy patch and he could not get up. It was cold that day in the eastern city of Baddeck, Nova Scotia.

Lucky for him, Calvin Kutcha had seen Stone’s car near the ski trail and then, noticed it was still there three hours later. So, he went home to get his eight-year-old German Shepherd named Arik. 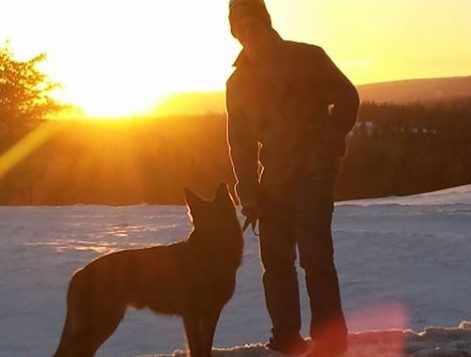 Seen here, Calvin Kuchta says Arik’s previous handler had called him an exceptional police dog and one of the best in the province of Nova Scotia. (Facebook)

Arik had previously worked for the national police, the RCMP and the skills he learned there were put to good use. Kutcha brought the dog to the trail, pointed to some tracks and Arik took off.

Soon, the two heard Stone calling for help and found him. An ambulance was summoned and Stone was taken to hospital with what turned out to be a broken hip.

For his heroism, Arik was inducted into the Purina Animal Hall of Fame. As stated in a news release: “Had Arik not been there to help [Kuchta] locate him so quickly, Lloyd would have likely suffered from severe hypothermia, and potentially frozen to death.”

This is the dog food company’s 50th year running a pet-recognition program.