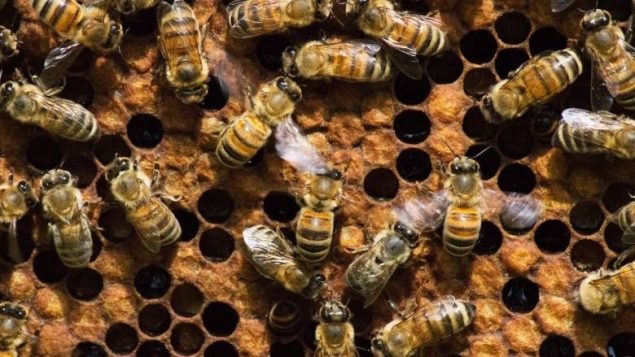 There is serious concern among beekeepers and farmers as hives are opened after the winter. Beekeepers are reporting exceptionally high losses. Photo: University of Guelph Honey Bee Research Centre

It could be the worst year on record for beekeepers in much of Canada.

The Ontario Beekeepers Association reports that among Ontario’s 3,000 beekeepers about 900 beekeepers responded to a survey showing seven in ten said they had suffered unsustainable losses. A third of those reported colony losses of 70 per cent or higher. Reports from Quebec show similar dramatic colony losses ranging from 40 to 80 per cent.

While pesticides have long been blamed for deaths, beekeepers are saying the long winter and unusually damp cool spring seems to have dealt a death blow.

Many say that the pollen the bees need usually comes in the early spring but this year the cool weather delayed trees and flowers for about a month.  One Ontario beekeeper said plants want warmth and sun to produce pollen and when it remains cool and overcast, they don’t.

In addition, the Queen bee needs abundant pollen and nectar to create lots of bees, but when that is lacking brood production is seriously affected.

Beekeepers note that if bees have been weakened by pesticides, they will not survive a harsh and long winter,

Unusually high losses have been reported across the country but especially in Manitoba, Ontario, and Quebec.

Winter losses are often in the 10-15 per cent range, When they reach 20 per cent, this adds extra costs to beekeepers to replenish colonies. When losses are at 50 per cent it can be catastrophic for beekeepers, who will be attempting to rebuild colonies all summer with little income from pollination services and/or honey sales.

Many are predicting problems for farmers across the country and ultimately for consumers if there are not enough bees to properly pollinate crops.