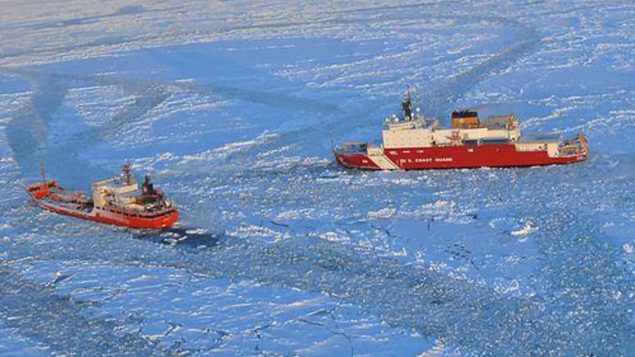 The narrow passage of water between Alaska and Russia connects the Pacific Ocean and the Arctic Ocean and is one of the most productive marine ecosystems on the planet.

Thousands of marine mammals such as bowhead, beluga and gray whales, Pacific walruses, and ice seals, as well as spectacled eiders and many other seabirds migrate every year through the strait, which is less than 85 km (53 miles) wide at its narrowest point.

The area is also home to dozens of Indigenous communities in Alaska and Russia who for millennia have depended on the region’s natural bounty for their livelihoods. 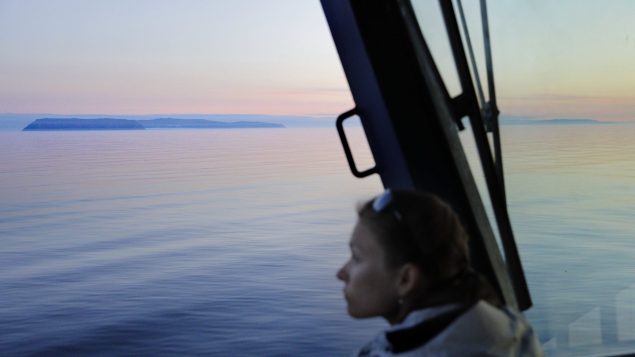 Researcher Daria Gritsenko looks out toward the American island of Little Diomede, Alaska, near left, and behind it on the right, the Russian island of Big Diomede, as the Finnish icebreaker MSV Nordica sails along the international date line through the Bering Strait, Friday, July 14, 2017. (David Goldman/AP Photo)

The Bering Strait has also become a bottleneck for increasing ship traffic in the Arctic since all ships that travel the Northern Sea Route along Russia’s Arctic coast or the Northwest Passage through the Canadian Arctic Archipelago must transit through it.

“We have observed a steady increase in Arctic shipping activities over the last decade, and these routing measures were jointly developed in response to this increased activity,” said Mike Sollosi, the chief of the U.S. Coast Guard Navigation Standards Division.

Located in U.S. and Russian territorial waters off the coasts of Alaska and the Chukchi Peninsula, the routes are designed to help mariners avoid shoals, reefs and islands and to reduce the potential for marine casualties and environmental disasters, said officials with the U.S. Coast Guard.

The routes are voluntary for all domestic and international ships and do not limit commercial fishing or subsistence activities.

“This is a big step forward as the U.S. Coast Guard continues to work together with international, interagency and maritime stakeholders to make our waterways safer, more efficient and more resilient,” said Sollosi.

“Large vessels will now have lanes charted to modern standards and Areas to Be Avoided that can keep them from navigating too close to ecologically sensitive underwater habitat,” Huffines said. “These measures will keep vessels on the safest course and reduce the risk of them running aground, colliding, or interfering directly with subsistence hunting.”