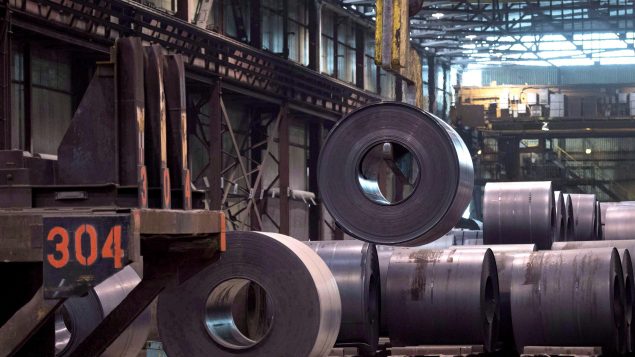 A coils of steel is moved by a crane at the Direct Strip Production Complex at Essar Steel Algoma in Sault Ste. Marie, Ont., on Wednesday, March 14, 2018. (Justin Tang/THE CANADIAN PRESS)

Canadian steelmakers would like Ottawa to retaliate against punitive U.S. tariffs on steel imports from Canada as quickly as possible, says the president of the steel industry’s association.

Joseph Galimberti, president of the Canadian Steel Producers Association, says it’s important that Ottawa move quickly on its announced countermeasures “so there’s not a window to ship unnecessarily into Canada without a tariff while there are tariffs applied on goods going into the United States.”

Trudeau and Foreign Affairs Minister Chrystia Freeland announced last week that Canada will hit back Washington for its “absurd” action with dollar-for-dollar countermeasures of up to $16.6 billion.

However, these countermeasures will take effect only on July 1, 2018 while U.S. tariffs on Canadian imports kicked in as of May 31.

Speaking after the meeting with Trudeau, Galimberti said he hasn’t asked yet the federal government for financial support for Canadian steel producers.

“We know there’s a risk to employment but I think we’d like some time to have a discussion with the government about what kind of support is appropriate,” Galimberti told reporters.

“If ultimately that’s monetary, if that’s what’s required to preserve investment and employment in Canada, to make sure that those 23,000 Canadians in steel continue working, then that’s what we’ll do. But to this point we haven’t initiated that discussion yet.”

Opposition parties grilled the governing Liberals on the timing of Canadian countermeasures.

Trudeau said he plans to continue to engage with the Trump administration on the question of tariffs but the government also needs time to consult with Canadians.

“We think it’s important that before we bring in tariffs that we consult with Canadians, that we make sure that what we’re doing are the right things for Canadians,” Trudeau said.