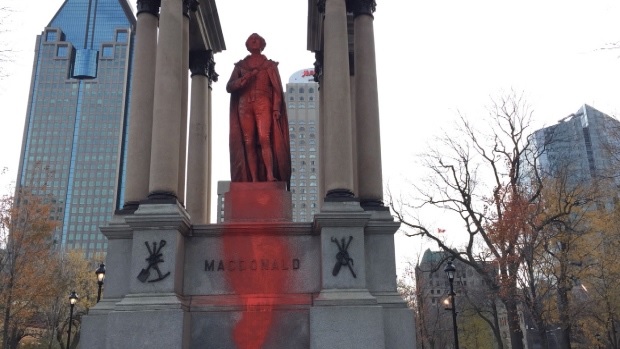 TheMontreal statue dedicated to Sir John A Macdonald- the Father of Confederation-was attacked by vandals last year just prior to Remembrance Day. 2017. In a statement the anonymous vandals claimed he was guilty of genocide. Once unquestionably honoured, he has now become controversial for his policies regarding indigenous peoples, with many calling for his name and statues to be removed from the public. PHOTO: Simon Nakonechny/CBC

(public comments open at bottom of page- will appear after moderating)

One of those is the “Sir John A Macdonald” prize “given to the non-fiction work of Canadian history judged to have made the most significant contribution to an understanding of the Canadian past” according to the CHA website.

Although the prize name is still showing their website, the CHA recently voted to remove the name of Canada’s founder and first Prime Minister from that prize. This is due to his promotion of residential schools and forcing indigenous tribes onto reserves which some have equated to white supremacy and genocide adding that because of that he should no longer be honoured.

Not everyone agrees with the historical logic of the name removal however.

Christopher Dummit (PhD) is an associate professor at the School for the Study of Canada at Trent University, Peterborough Ontario.

In recent times, several important Canadian figures have had their histories reviewed, and been found wanting. That is, determined rightly or wrongly, not to deserve honoured places in history. 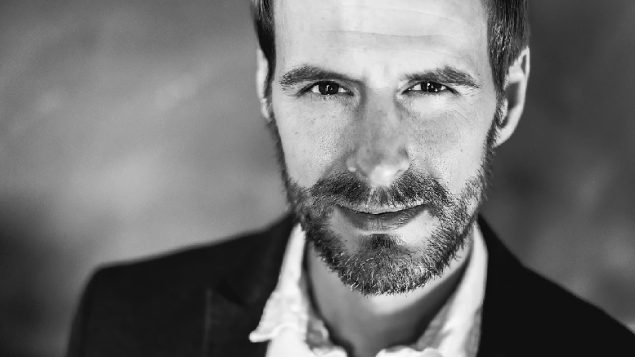 Last year, the Langevin Block, an important federal government building in Ottawa named after Sir Hector-Louis Langevin who was one of the so-called “Fathers of Confederation” had that name removed due to his association with Canada’s residential school system.

The founder of Halifax Nova Scotia,  Edward Cornwallis, recently had his statue removed, along with efforts to remove his name from many buildings, streets and geological features.

The Law Society of British Columbia recently removed a statue in the lobby of their building of Sir Matthew Baillie Begbie, the first chief justice of British Columbia. He was the judge responsible for sentencing six indigenous Chiefs to death in 1864 for their part in leading an attack on a road building party . Prime Minister Trudeau recently apologized on behalf of Canada for the hangings, (although B.C. was a British colony at the time and not part of Canada.)

The Elementary Teachers Federation of Ontario (ETFO) also called on the provincial government to remove Macdonald’s namefrom the many schools in the province saying, ”Macdonald played a key role in developing systems that perpetuated genocide against Indigenous people”.  That call was rejected by Ontario Premier Kathleen Wynne. 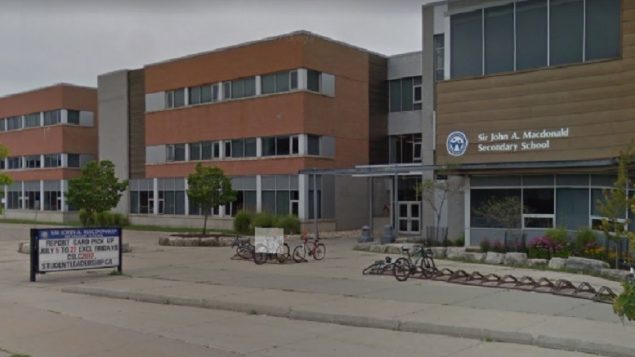 Sir John A Macdonald Secondary School (high school) in Waterloo, Ontario, one of many dozens of schools in Ontario, and hundreds across Canada, named after the first prime minister. (Google streetview)

In this latest move against an historical figure of the past, many of the same arguments of racism are used against Macdonald by the approximately 1000 member CHA which voted 141-11 for the name removal.

University of Regina historian James Daschuk won the $5,000 Macdonald prize in 2014 for his book called “Clearing the Plains: Disease, Politics of starvation and the loss of Aboriginal life”

In promoting the name removal, he is cited in the National Post saying. “It’s often the argument that Macdonald did a lot of good things. He built the country. But he built the country on the backs of the Indigenous people”.

Professor Dummit however argues that it’s not correct to judge such figures by modern standards, and “taking them out of context”.  He says the move is more one of political correctness and that some are failing to be good historians.

He says that as an historian he worries that a certain kind of political ideology has taken over parts of the profession.