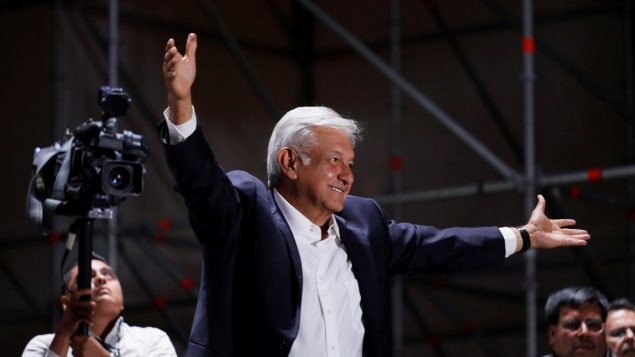 Prime Minister Justin Trudeau spoke on the phone with Mexico’s President-elect Andres Manuel Lopez Obrador on Monday to discuss the stalled renegotiation process of the North American Free Trade Agreement between Canada, the United States and Mexico, according to the Prime Minister’s Office.

Trudeau personally congratulated the leftist-populist Mexican leader on his landslide victory in Sunday’s election that saw Lopez Obrador’s party and its allies also winning control of the Mexican senate.

“The Prime Minister and the President-elect look forward to cooperating on an agenda to create good jobs for people in both countries,” said a readout of the phone conversation released by the PMO.

“They discussed the mutually beneficial economic and trading relationship between the two countries, and their shared priority of updating the North American Free Trade Agreement for the betterment of their peoples.”

Lopez Obrador, who takes office in December, said on Monday that he will be respectful of the current government’s NAFTA negotiators and that his transition team will seek to join the trade talks.

The 64-year-old former mayor of Mexico City, who became the first leftist to win the Mexican presidency since one-party rule ended in 2000, also spoke with U.S. President Donald Trump on Monday, with the two maverick leaders discussing immigration, trade and security issues in a phone call.

Lopez Obrador, who says he wants firm but friendly relations with Washington, said he would discuss NAFTA with outgoing President Enrique Pena Nieto when they have their first meeting after the election, set for Tuesday.