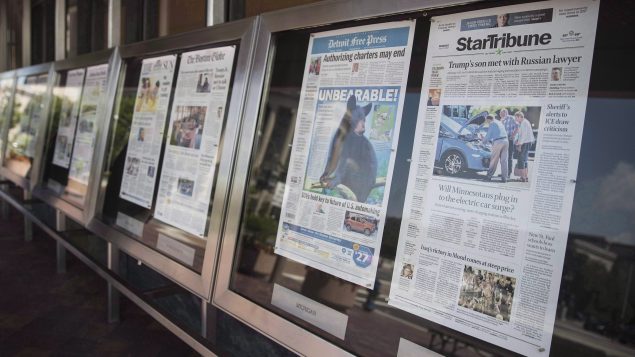 The U.S. Department of Commerce says it has ended countervailing duties on supercalendered paper from Canada that have been in place since 2015. (Carolyn Kaster/The Canadian Press/AP/file)

Canada welcomes the decision by the United States to end countervailing duties on imports of Canadian supercalendered paper and to refund all duties collected since August 2015, Foreign Affairs Minister Chrystia Freeland said Tuesday.

The decision by the U.S. Department of Commerce came a day after the World Trade Organization ruled largely in favour of Canada in the dispute over perceived subsidies on supercalendered paper, which is mainly used in mass circulation publications, newspaper supplements, and advertising inserts.

The panel found that the Department of Commerce’s practices breached numerous WTO obligations.

It also found that the Department of Commerce improperly included an inflated subsidy rate for non-cooperation in an average rate for other Canadian companies that were later found to have minimal or no subsidy rates, Freeland said.

“No two nations depend more on each other for their mutual prosperity than the United States and Canada,” said Freeland.  “The WTO panel report supports fair and due process for the Canadian forestry industry and for Canadian workers.”

U.S. Trade Representative Robert Lighthizer issued a statement Friday decrying the ruling as “the latest example of judicial activism at the WTO,” while noting that the U.S. officially terminated the duties on Thursday.

Last year, a NAFTA review panel also ruled in Canada’s favour with a unanimous decision to order the U.S. Department of Commerce to reconsider its duties against Canadian mills that produce glossy paper.

The U.S. imposed the duties in 2015, including a 20.18 per cent duty on Nova Scotia’s Port Hawkesbury Paper, a 17.87 per cent duty against Montreal-based Resolute Forest Products, and a duty of 18.85 per cent on the J.D. Irving mill in New Brunswick and Catalyst Paper of B.C., though J.D. Irving successfully had its duties reduced last year.

Exports of supercalendered paper from Canada to the United States were valued at $959 million in 2014.