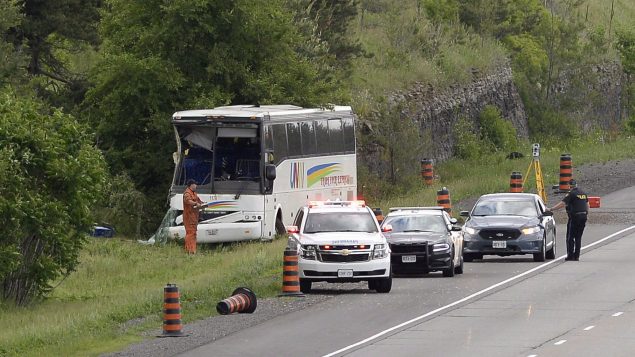 OPP officers work at the site of a crash involving a tour bus on Highway 401 West, near Prescott, Ont. on Monday, June 4, 2018. (Justin Tang/THE CANADIAN PRESS)

Car drivers and passengers in most of Canada have had to buckle up since the 1980s but now the federal government is moving to make seat belts mandatory on highway buses.

“We’ve all heard the message to buckle up over the years, and I think it’s time we brought this approach to highway buses too,” Transport Minister Marc Garneau said in a statement. “By having seat belts on highway buses, we can help reduce injuries in severe collisions, such as rollovers, and improve safety for everyone.” 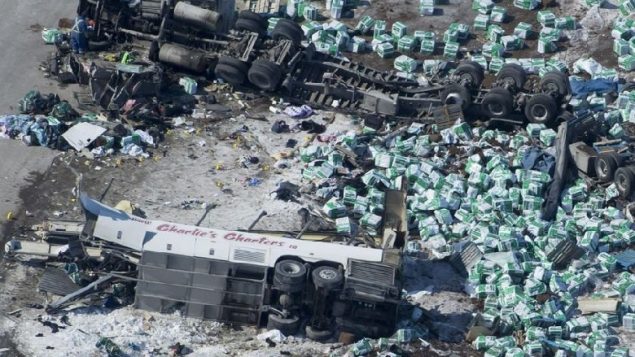 The accident site at a crossroads in rural Saskatchewan in which 16 members of the Humboldt Broncos junior hockey team were killed and 13 others injured. (Jonathan Hayward/THE CANADIAN PRESS)

The announcement comes after 16 people died and 13 others were injured in a collision between the Humboldt Broncos hockey team bus and a transport truck on April 6, 2018 in the western province of Saskatchewan.

However, Transport Canada said it first proposed seat belt requirements in 2017 and it has considered feedback received from industry in the new, final requirements.

Transport Canada defines medium and large buses as having a weight over 4,536 kg.

Small buses (under 4,536 kg), with the exception of school buses, already have lap and shoulder belts, Transport Canada said.

While the new requirements will not apply to school buses, which are already designed to protect school children in the event of a crash, school bus operators can install them on a voluntary basis, so long as they meet Transport Canada’s requirements, officials said.