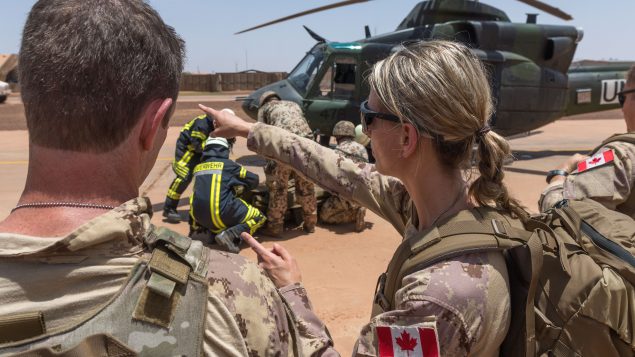 Photo has been digitally altered for operational security purposes.  Members of the Operation PRESENCE - Mali medical staff work alongside German firefighters and medics during a crash exercise with a simulated casualty at Camp Castor in Gao, Mali on July 23, 2018.   (Master Cpl. Jennifer Kusche/CAF)

While majority of Canadians support the Liberal government’s decision to send about 250 Canadian troops on a peacekeeping mission in Mali, opposition to the dangerous deployment is the greatest among Conservative voters and those who closely follow the situation in the West African nation, according to a new poll by the Angus Reid Institute.

The mission of the Canadian military contingent would be to provide the United Nations Multidimensional Integrated Stabilization Mission in Mali (MINUSMA) with a 24/7 aeromedical evacuation capability to safeguard the lives of UN and other forces, as well as civilians, the Liberal government announced earlier this month. 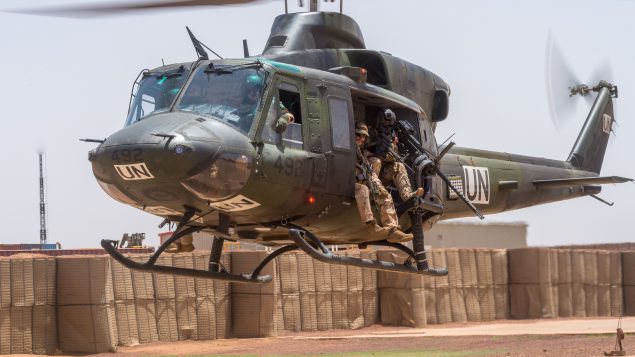 With 162 peacekeepers killed since 2013, Mali is considered the most dangerous United Nations peacekeeping mission in the world.

However, six-in-ten (59 per cent) Canadians support the Trudeau government’s decision to deploy Canadian troops to Mali while four-in-ten (41 per cent) say that the mission is too risky and Canada should avoid participation. Opposition to the Canadian participation is led heavily by past Conservative (CPC) voters (59 per cent), according to the poll.

Among past Liberal and New Democratic Party (NDP) voters support for the mission stands at 71 and 69 per cent respectively.

The poll also shows that more than four-in-ten Canadians have never heard of the conflict in Mali, while fewer than one-in-ten Canadians say they have seen a lot of media coverage of the situation in Mali and have discussed it with friends and family. 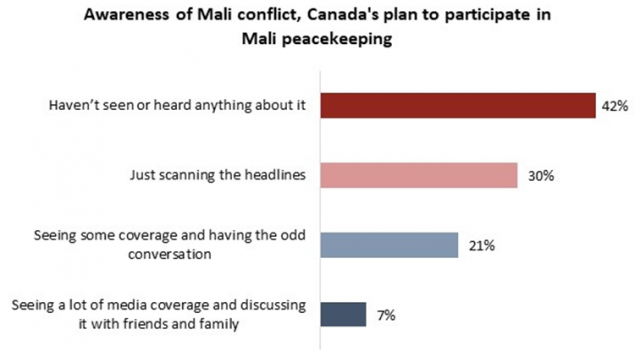 “This trend of a lack of attention for international crises is evident in previous work done by the Institute,” the report says. “Last year, just 34 per cent of Canadians said they were following the Rohingya crisis in Myanmar, while a half said they were aware of the siege of Aleppo in Syria.”

The poll also shows that while participation in peacekeeping operations is a source of pride for most Canadians (70 per cent), nearly an equal number of respondents (65 per cent) consider improving Canada’s trade ties with foreign partners as the country’s top foreign policy agenda. 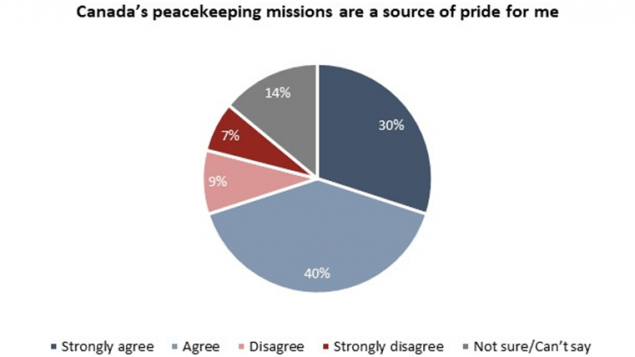 Also only a quarter of Canadians think the country should spend more on humanitarian aid and one-in-ten Canadians prioritize boosting Canada’s military presence on the global stage.