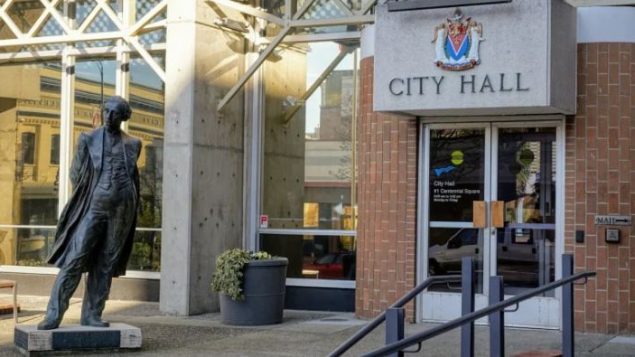 Victoria City Council voted to remove this statue of Canada's first prime minister, Sir John A. Macdonald, from the front steps of Victoria City Hall on Saturday, Aug. 11, in a move the city hopes will improve relations with indigenous people. (Mike McArthur/CBC)

Victoria, the capital city of the west-coast province of British Columbia, is the setting for a controverial change, in removing the statue of Canada’s first Prime Minister, John A. Macdonald, from the entrance to City Hall.

Victoria City councillors passed a motion earlier today, in a seven-to-one vote, in support of a recommendation from a group known as the City Family.

The City Family was created last year to address issues of reconciliation with Indigenous groups in the Victoria area.

The move is in keeping with the larger reconciliation process underway across the country with Canada’s Indigenous peoples, and Victoria is the first Canadian city to follow through on this recommendation.

“The conversation will continue”

John A. Macdonald was one of what’s known in Canada, as the “Fathers of Confederation” and the first Prime Minister after 1867.

He is also known as the creator of the Residential School system which was a government sponsored plan that took indigenous children from their families and communities at as young as four and five years old.

In most cases, the children were put into boarding schools, run by various Christian denominations, It began in the 1880’s and the last school closed as recently as 1996.

The misguided attempt to integrate indigenous children into the “Canadian” way of life resulted in multi-generational disaster.

The shocking violence and abuse the children suffered in these institutions came to light during the Truth and Reconciliation Commission hearings (TRC) where many of the survivors in their old age, only spoke of their experiences for the first time.

Irwin Cotler, a former Canadian Liberal Justice Minister, described the system as “the single most harmful, disgraceful and racist act in our history”.

In this new millenium, with the work of former students for recognition and restitution, the Indian Residential Schools Settlement Agreement was reached in 2007.

In Victoria, Mayor Lisa Helps explained that, “One of the things we heard very clearly from the Indigenous family members is that coming to city hall to do this work, and walking past John A. Macdonald every time, feels contradictory.”

She said, “the statue is a painful reminder of colonial violence for those who have to walk into the building”.

Victoria Councillor Geoff Young did not support the motion.

“I don’t disagree that this is a subject that is worthy of discussion,” he told CBC News.

“But I think that it’s not just the few members of council and few members of the Aboriginal nations and others who should have the benefit of that discussion. I think it should be a discussion for all citizens of the city.”

In the meantime, the plan is to remove the statue temporarily on Saturday.

Mayor Lisa Helps said “history is not being erased”, she said “the way we tell stories of our history is always changing and this is another example of that”.

She said the discussions have been ongoing since July 2017.

“It has been a year of discussion,” she said. “It may feel quick to some, but the conversation will continue.”