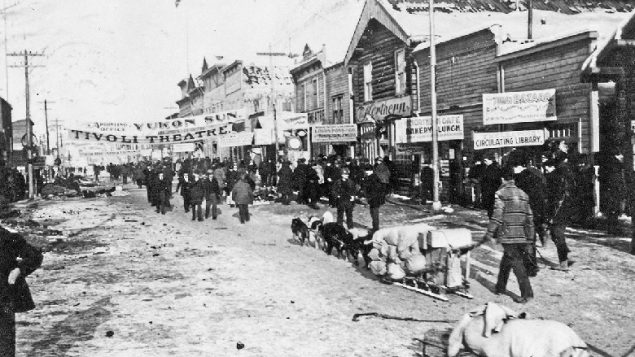 Dawson City Yukon in 1898,, The discovery of gold in the Klondike turned a few empty mudflats into Dawson City, a bustling centre of around 30,000. The discovery of an lod buried safe has led to speculation of a treasure inside ( Library-and-Archives-Canada. C-8797)

Workers in Dawson City, Yukon were digging into a site in the town centre when the excavator shovel hit a large metal object with a loud clang. 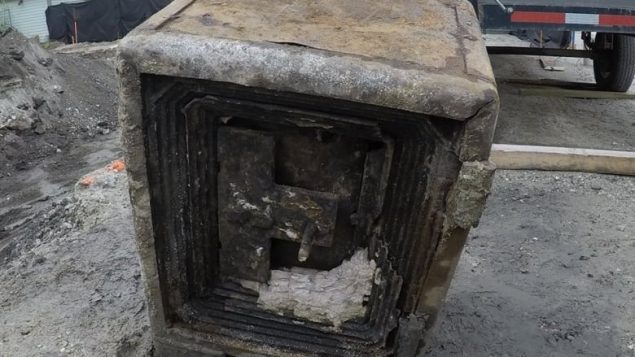 The buried safe found in Dawson City on Saturday by construction workers. It’s unknown what might be inside. ( Corey Cartwright)

They hauled it up with the heavy outer door broken off in the process but the inner door remains. The teeth on the excavator shovel had opened up enough space to enable public works employees to see there are boxes inside, but what they might contain is still speculation.

Historically the safe is also of not much value as there is currently no story behind it, who had it, where it was used etc.

However, it was found under the site of a building complex that dates back to the town’s goldrush beginnings and a general store that sold everything from shovels, to furniture, tents to cutlery. The buildings burned to ground in 1951, possibly with the safe inside. 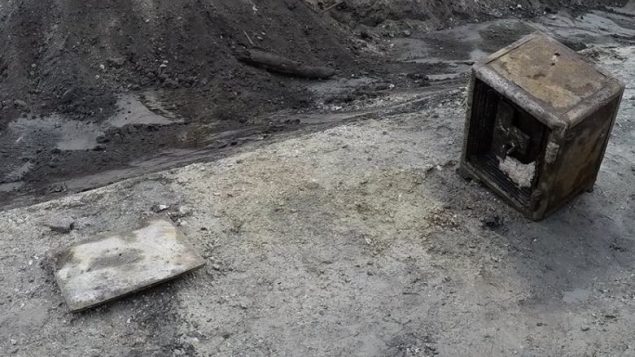 The heavy exterior part of the safe door came off during excavation while the interior door is still locked. There appear to be boxes inside, but no clues as to what they contain. (Corey Cartwright)

The lack of information about the safe hasn’t stopped a lot of speculation though about what it might contain in the drawers and boxes that can be seen inside. The director of the Dawson City Museum put a damper on dreams of gold however. Quoted in the National Post, Alex Somerville said because the store sold everything, it could simply be a “new” safe that had been unsold in the warehouse when the complex burned down.

The safe will be opened this weekend as part of Discovery Days, the annual celebration of the 1897 discovery of gold in the region and the start of the Yukon Gold Rush.