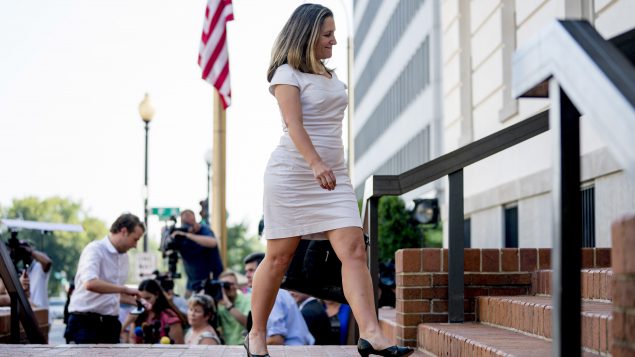 Trade talks resume as Canada's Foreign Affairs Minister Chrystia Freeland arrives at the Office Of The U.S. Trade Representative, this afternoon in Washington. Canada, America's longtime ally and No. 2 trading partner, was left out of a proposed deal Trump just reached with Mexico and is eager to keep its place in the regional free-trade bloc and fend off the threat of U.S. taxes on its vehicles. (Andrew Harnik/AP)

“We’ll get rid of the name NAFTA, it has a bad connotation”

“They used to call it NAFTA, we’re gonna’ call it The United States Mexico Trade Agreement, and we’ll get rid of the name NAFTA, it has a bad connotation because the United States was hurt very badly by NAFTA for many years, and now it’s a really good deal for both countries”, Donald Trump said in the Oval Office at the White House yesterday,

The Canadian delegation of negotiators arrived in Washington this morning and Foreign Affairs Minister Chrystia Freeland arrived from meetings in Germany late this afternoon.

What Donald Trump described yesterday as “a great deal” for Mexico and the U.S. has put new pressure on Canada to get back into the talks, to meet the president’s Friday deadline.

The trilateral talks broke off in May, before Mexico’s national election. Then Mexico and the U.S. resumed talks, it was presumed on the unique challenges between the two countries in the auto sector.

Yesterday’s announcement from Washington came as a surprise. 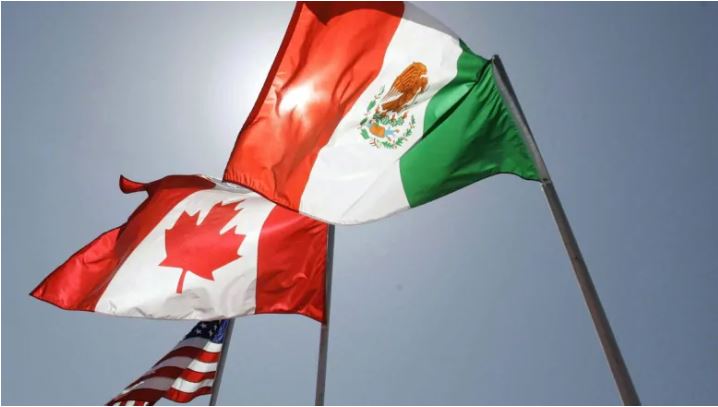 Trade talks between the U.S. and Mexico did not include Canadians, but they will have known the details of what was being decided, said Michael Kergin, former Canadian ambassador to the U.S. (Judi Bottoni/AP)

Earlier today in a brief press conference Canada’s Prime Minister, Justin Trudeau, told reporters he was encouraged by the developments in the trade talks and reiterated that one of the big stumbling blocks for Canada, our supply management system for the dairy industry, has his full support.

Donald Trump has consistently targeted what he refers to as the 300 per cent tariffs imposed on American dairy products. The tariffs are not this high, but they were imposed to protect the Canadian market and because of production processes Canada does not allow in this country.

The Mexican delegation is said to be eager to have the deal in place by December 1st, 2018, before the new government in that country takes office.

There are many questions in the United States about the legality of a bilateral agreement with Mexico.

In an interview on CBC Radio’s program, The Current, Michael Kergin, the Canadian ambassador to the United States from 2000 to 2005, said Trump is under a lot of pressure to finish this deal.

“He’s got a fairly strong incentive to try and declare victory and say: ‘I’ve got a new agreement with the Canadians, we’ve had them cave on this, that, and the other,’ in fact, whether we do or not — but he will spin it that way,” Kergin said.

Mary Scott Greenwood, CEO of the Canadian American Business Council, is optimistic. In an interview with the CBC’s News Network earlier today, she emphasized the progress that was made in the Mexican talks, particularly with regard to one of Canada’s demands on the extension of a sunset clause.

“It’s not just a take it or leave it deal for Canada”, Scott Greenwood said from Washington.

Late this afternoon Chrystia Freeland arrived at the Trade Building in Washington where the Canadians are said to be going over the U.S. Mexican trade deal, line by line.