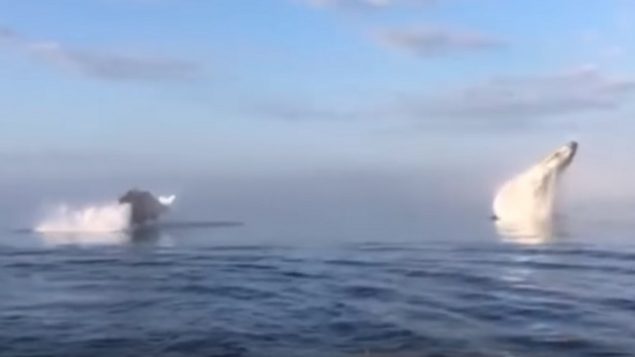 This freeze frame from a video shows two of the three whales which leapt out of the water to the delight of nearby tourists. (Edward Giroux/YouTube)

People around the world are watching and commenting on a video that shows three humpback whales leaping out of the water consecutively off Canada’s Atlantic coast.

Ocean Explorations Whale Cruises operates out of Tiverton in the eastern province of Nova Scotia and is one of several companies that offer whale watching tours in Canadian coastal waters.

Last month it ran a small Zodiac boat and passengers on board saw three whales lolling about at the surface blowing water. The humpbacks all dove and a man can be heard repeating “Get ready, get ready. It’s going to be a triple breach.”

And he was right. The whales leapt into the air one at a time in a dramatic display of force and beauty. 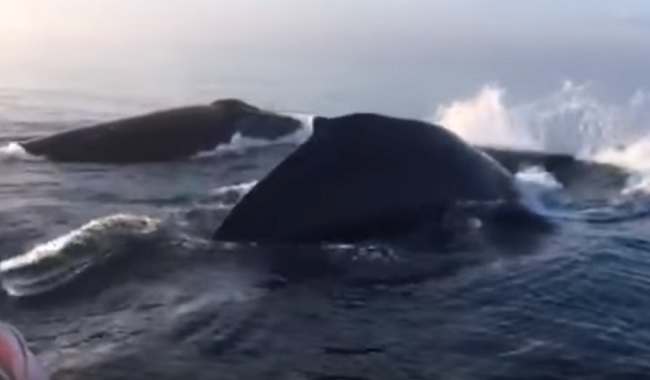 The whales had been lolling at the surface before diving. (Edward Giroux/YouTube)

The video, captured by passenger Edward Giroux, was posted online. Some people criticized the boat operator for being too close to the mammals. But the tour company responded saying the whales had approached it with one of them swimming directly under the dinghy. It added that starting the engines to move the boat would have been more bothersome for the whales.

In July 2018, the Canadian government set new regulations requiring people and vessels to keep a distance of 100 metres from most whales, dolphins and porpoises to protect them.

A larger distance of 200 metres is the rule to protect threatened orca whales off Canada’s Pacific coast and beluga whales in the St. Lawrence Estuary which empties into the Atlantic Ocean.