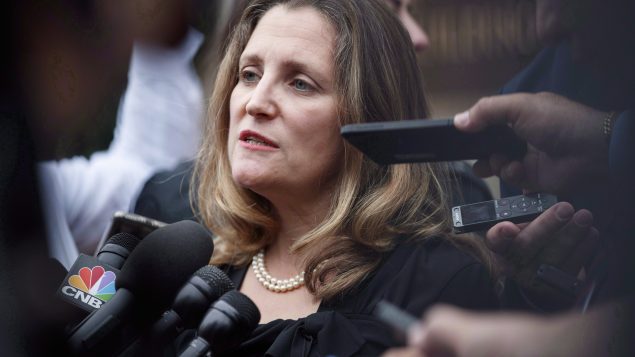 Canadian Foreign Affairs Minister Chrystia Freeland speaks to the media as she arrives at the Office Of The United States Trade Representative in Washington on September 11, 2018. (Carolyn Kaster/THE CANADIAN PRESS/AP)

Chrystia Freeland returns to Washington to hammer out NAFTA deal

Foreign Affairs Minister Chrystia Freeland is flying back to Washington tonight for the fourth time in as many weeks as she tries to bridge the gap between Canada and the United States in negotiations to revamp the crucial North American Free Trade Agreement (NAFTA).

But speaking to reporters after a cabinet meeting in Ottawa on Tuesday, Freeland said she is also willing to walk out of the talks with U.S. Trade Representative Robert Lighthizer if Canada doesn’t get a “good deal.”

“As the prime minister has said very clearly, our government is committed to getting a good deal for Canadians and we absolutely believe that no deal is better than a bad deal,” Freeland said.

Any negotiator going into a negotiation believing that he or she must get a deal at any price will be forced to pay the maximum price for that deal, Freeland added.

At the same time, Freeland said she’s been working intensively with Lighthizer and his team over the last four weeks in a cordial atmosphere and has gained a better understanding of issues on both sides.

“One of Canada’s national characteristics is a talent for compromise,” Freeland said. “We’re good at finding compromises, it’s something that we do as a country.”

The Trump administration announced last month that it has reached an agreement in principle with Mexico on the trilateral free trade pact.

However, ongoing disagreements on issues ranging from a trade dispute resolution mechanism to Canada’s protectionist measures for the country’s dairy sector have so far prevented a similar deal between Ottawa and Washington.

There are also disagreements on intellectual property protections, particularly in the pharmaceutical sector, access to public contracts and the amount of merchandise Canadians can buy from U.S.-based online retail giants such as Amazon without paying import duties.

“Canada’s objective and really the only target we’re looking at in this negotiation is the target of getting a good deal,” Freeland said.

Canada and the U.S. have until Oct. 1 to present an agreed-upon text to the U.S. Congress in order to join the deal the Trump administration has signed with Mexico. Trump has threatened to exclude Canada from the trilateral trade pact if Ottawa continues to resist the U.S. demands.