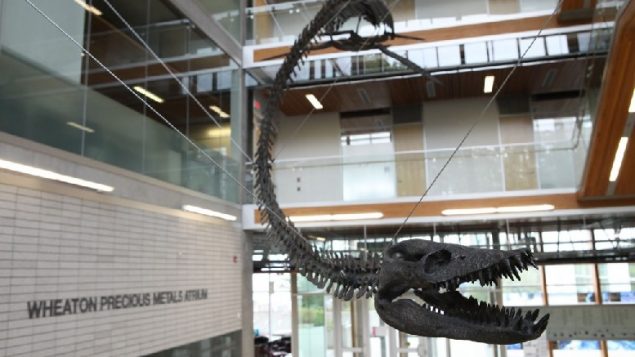 The University of British Columbia now has a rare ancient sea monster to amaze visitors to its Pacific Museum of the Earth.

The 13 metre long creature lived in what was known as the Western Interior Seaway, a giant sea which covered most of central North America.

The 13-metre Elasmosaur seen from above. It inhabited a giant sea which covered most of the central area of continental North America. Although it lived among dinosaurs millions of years ago, it was a marine reptile (UBC Public Affairs)

This rare example of an Elasmosaur lived about 80 million years ago with dinosaurs in the late Cretaceous period, but it is in fact a plesiosaur, a marine reptile, not a dinosaur.

The skeleton was found in shale in 1988 near present day Courtney British Columbia. More than half the beast’s length is just it’s neck (about 7 metres) meaning it likely could barely raise it’s head out of water.

Meanwhile in Toronto, the Royal Ontario Museum (ROM) will soon unveil it’s latest exhibit, an exceptionally preservered anklyosaur, which also happens to be from the late Cretaceous. The particular specimen is crurivastator, means ‘destroyer of shins’ for its menacing, weapon-like tail club and curators realised it was a new species. 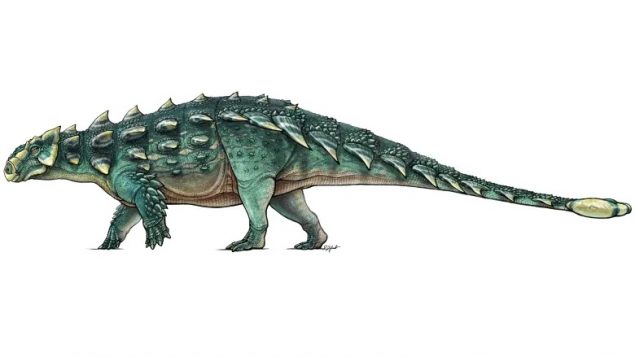 How the ankylosaur, Zuul crurivastator would have looked some 76 million years ago. It gets part of its name from the club at the end of its tail used as a defensive weapon. (ROM)

The dinosaur is one of the most complete and well preserved specimens of its kind in the world.  The ROM staff have named it Zuul after the horned creature in the 1984 film Ghostbusters. The exhibit “Zuul: Life of an Armoured Dinosaur” will open on December 15. 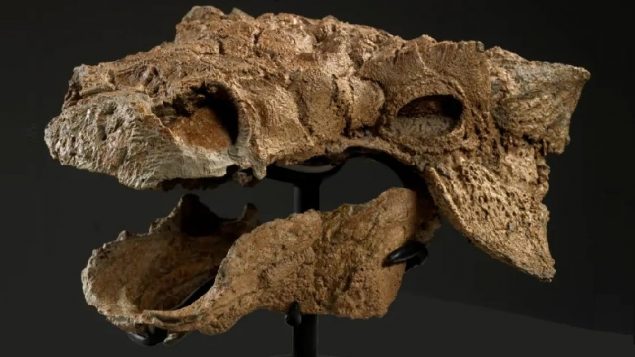 The ancient skull of “Zuul”. The ROM”s ankylosaur when revealed in December, will be one of the world’s best preserved examples of anklyosaur. (Brian Boyle-ROM)

Of course summer in Canada is the most prolific time for paleontologists and university scientists and students to go looking for fossils. Although the badlands of Alberta are world renowned for fossil finds,, neighbouring Saskatchewan also has extensive fossil beds. 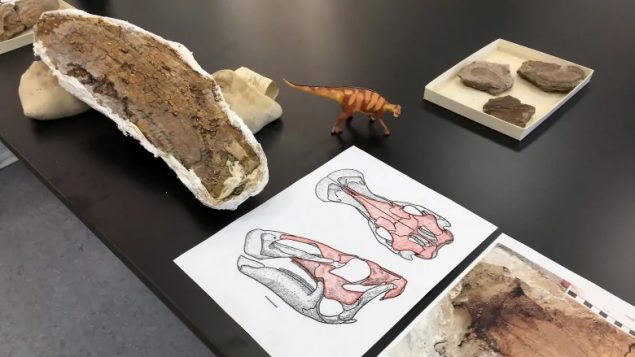 Portions of the skull of a duckbill dinosaur- Edmontosaurus – found this year in Saskatchewan. Ryan McKenna- Canadian Press)

This summer they turned up a rare duckbill dinosaur skull. Perhaps even more exciting was the find of a ancient wasp perfectly preserved in amber. The find will add to knowledge about how insects evolved over millions of years. 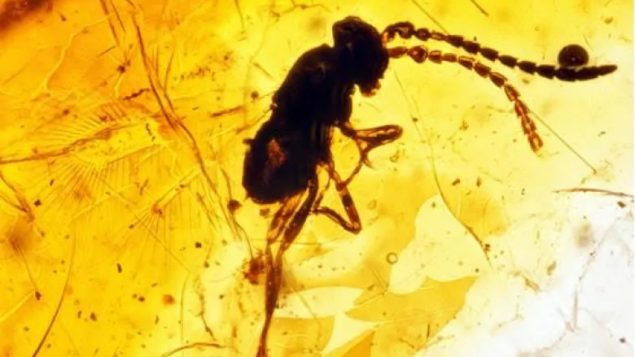 A 65 million year old wasp also found this year in Saskatchewan, Looking very closely you can even see the delicate wings. (Gov. Saskatchewan)