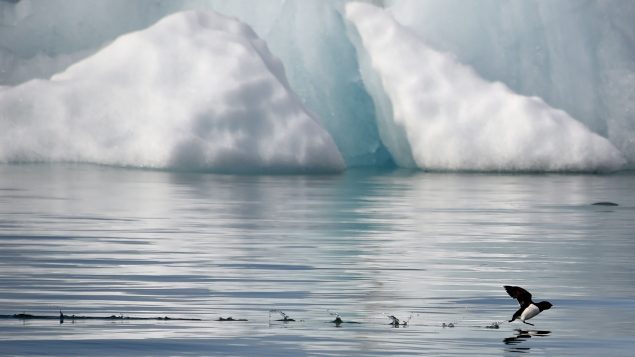 A little auk (Alle-alle) flies near the Kronebeene glacier in the Svalbard archipelago, in the Arctic Ocean, on July 21, 2015. (Dominique Faget/AFP/Getty Images)

Canada, the European Union and eight other countries signed Wednesday a legally binding international accord that will protect nearly three million square kilometres of the Central Arctic Ocean from unregulated fishing.

Once it enters into force, the agreement, which was signed in Ilulissat, Greenland will prevent commercial fishing in the high seas of the world’s smallest ocean for at least 16 years while scientific research is conducted to learn more about its marine life and resources. 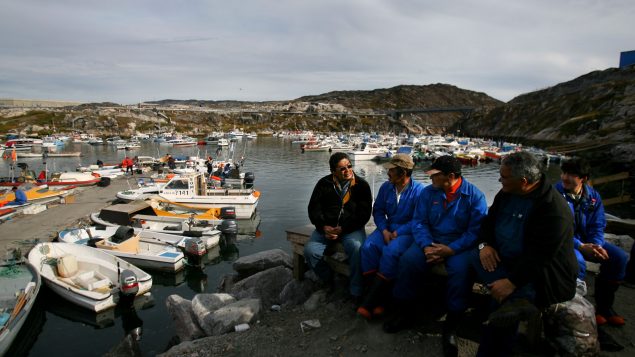 Inuit fishermen rest by their boats on August 30, 2007 in the town of Ilulissat, Greenland. (Uriel Sinai/Getty Images)

“It’s a really important agreement for Canada, for the Arctic Inuit peoples and for all participants,” said Nadia Bouffard, Canada’s chief negotiator at the talks. “And it’s actually a good news story globally for demonstrating cooperation and sustainable development for the Arctic.”

Bouffard said the signing ceremony in Ilulissat was a proud moment for Canada and capped years of hard work to reach “a very strong, proactive” agreement to prevent unsustainable fishing in the Central Arctic Ocean, in an area the size of Ontario and Quebec combined.

“It’s historic because this is the first time that an international agreement of this magnitude has been reached before any fishing has taken place in a region of the high seas,” Bouffard said in a phone interview from Ilulissat.

“Under this agreement all parties have agreed that no commercial fishing will take place in the high seas while we gain a better understanding of the area, of the ecosystem and until we have appropriate conservation measures established to actually regulate that fishery.”

(listen to the full interview with Nadia Bouffard)

Steve Ganey of the Pew Charitable Trusts, which had advocated for the accord for nearly eight years, said with the agreement in place, the Central Arctic Ocean is now the largest marine area where commercial fishing has been proactively placed off-limits in the interest of precaution.

“As new open waters emerge at the top of the world, international leaders have agreed that it would be risky and unwise to allow commercial fisheries to operate in the Arctic before scientists have established a baseline for monitoring the health of the region’s marine ecosystem,” Ganey said. 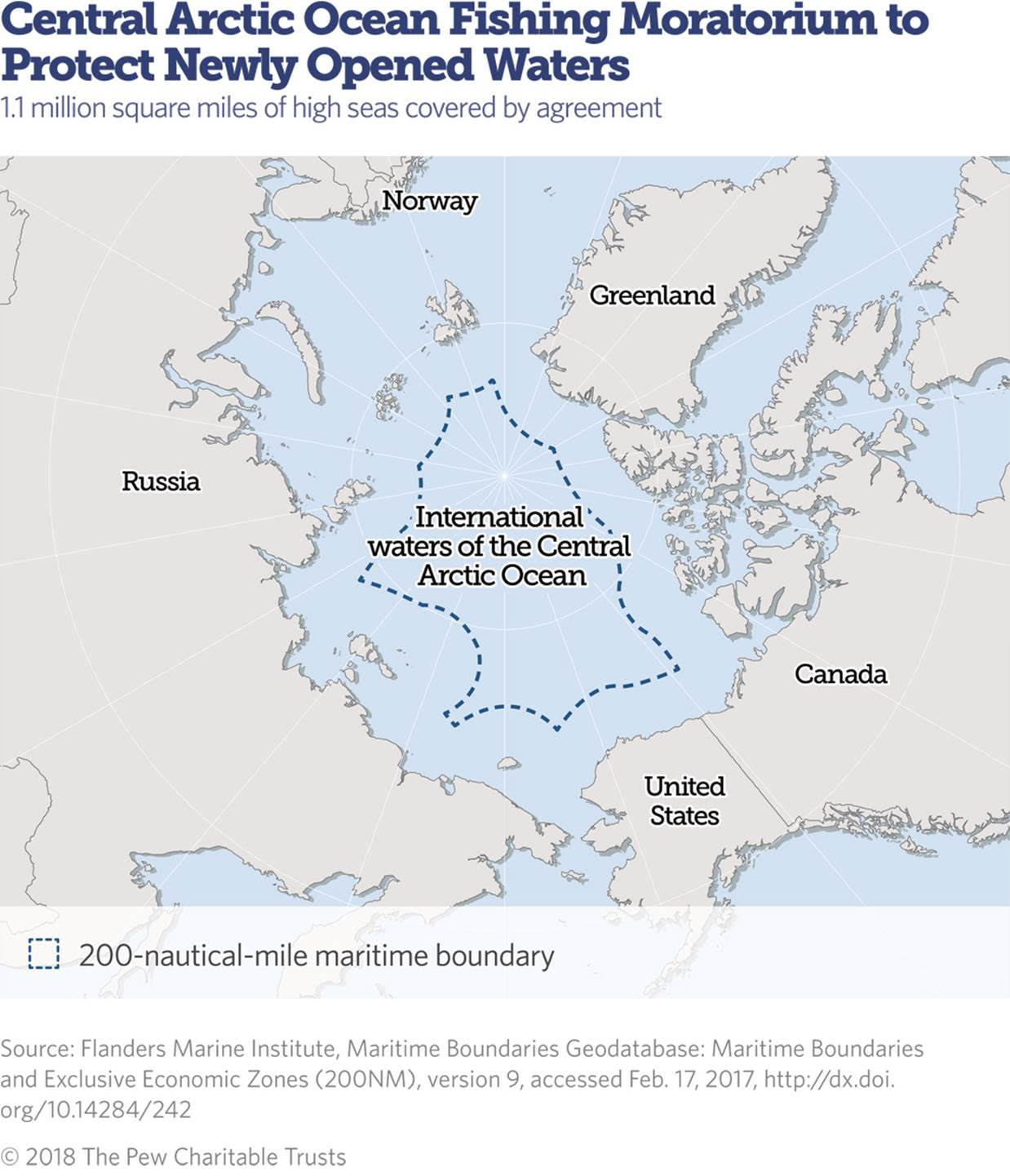 The agreement is a great legacy for future generations and, particularly, for the Inuit who rely on the region’s natural resources for their food, cultural and spiritual purposes, Bouffard said.

Protecting fish stocks and marine ecosystems in the Central Arctic Ocean will also help protect marine mammals that rely on these fish stocks and are in turn vital for the Inuit way of life, she said.

“It’s all interlinked and it’s important that we make sure that we go gather the knowledge, because we have very little knowledge of this area,” Bouffard said.

While the Central Arctic Ocean is still covered in ice for most of the year, a new analysis of satellite ice data prepared by Ocean Conservancy, reveals that between 2010 and 2017, the average minimum thickness of sea ice in this region was 60 per cent less than in the 1980s.

At the same time, the amount of open water each September between 2010 and 2017 has increased to an average of 22 per cent as compared to only one percent in the 1980s. 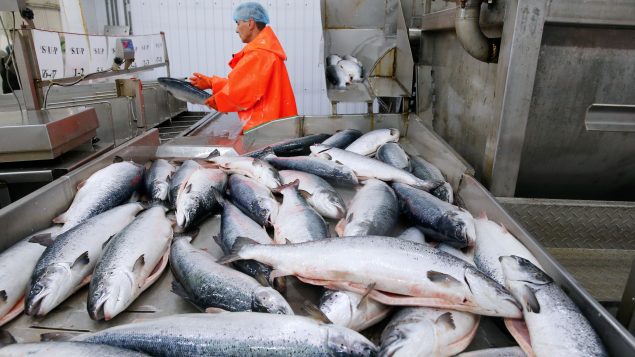 A picture taken on August 3, 2017 shows employees processing salmon at a plant in the Arctic Circle port city of Murmansk.(Maxim Zmeyev/AFP/Getty Images)

The agreement will enter into force once all the participants have ratified it, Bouffard said.

In Canada it will require the government to table the agreement in parliament for 21 sitting days, after which it will seek the authorization to ratify it, which will be done through the minister of foreign affairs, Bouffard said.

“We’re hoping that it’s going to be done quickly so that Canada can be one of the first ones to ratify the agreement,” Bouffard said. 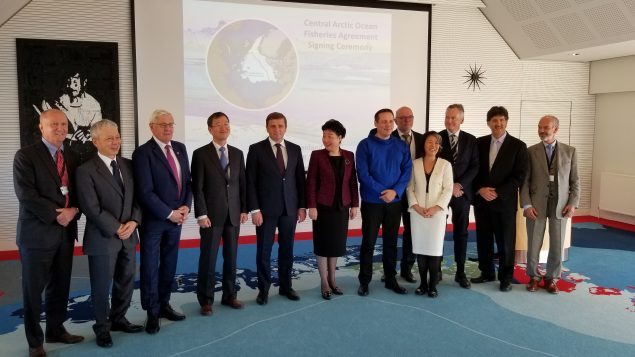 Officials from five Arctic countries and five major distant fishing powers met in Ilulissat, Greenland on Wednesday, Oct. 3, 2018 to sign a legally binding international accord that will protect the Central Arctic Ocean from unregulated fishing. (Photo courtesy of Department of Fisheries and Oceans Canada)

Still, it’s a process that could take years and the parties to agreement can use this time to do their homework, she said.

While the agreement covers the five Arctic coastal states and five other players – Iceland, Japan, South Korea, China and the EU – that have major distant fishing fleets, the next step of the process would be to invite other nations to formally join the agreement, Bouffard said.

Countries that are part of the United Nations Fish Stocks Agreement have already undertaken not to undermine separate regional agreements, such as the one signed for the Central Arctic Ocean, she said.

As for the others, the ten signatories to the Central Arctic Ocean fishing moratorium have also agreed to use their capabilities to monitor the area and to make sure that nobody undercuts the agreement, Bouffard said.