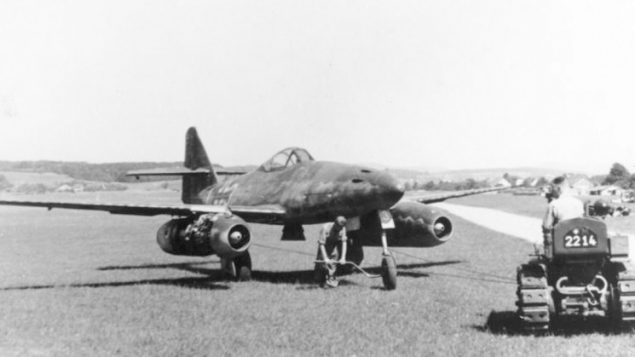 The Me-262, a technological marvel and German secret weapon, was introduced in mid 1944, Canadians were the first to shoot one down in combat. (Bundesarchiv-bild-141-2497-wiki commons)

The D-Day invasion of Europe was months past but the fighting in and over Europe was increasingly bitter and deadly.

In the skies, the Germans had introduced an astounding new weapon, the jet fighter, far faster than any Allied plane, and was still highly manoeuverable.

The radical new plane, the Messerschmitt-262, had been introduced only that summer and was still shocking fighters and bombers who encountered it.

Nevertheless, while American planes had caused two of the new planes to crash with no shots fired by either side (one had run out of fuel), Canadians were the first to actually down the new weapon in a fight proving it could be defeated. 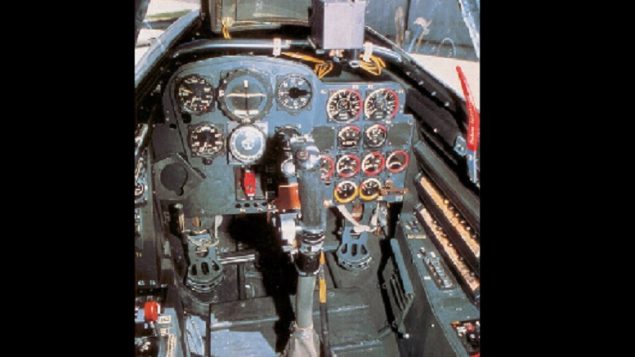 view of Me-262 cockpit (wiki commons)

On this day in 1944, a flight of Spitfires MkIX’s from 401 squadron were over Nijmegen Holland in the early afternoon when they spotted a 262 on a bombing run at a bridge.

The several Canadian Spitfires attacked the lone German jet which chose to fight rather than use its speed to escape.

Five Canadians had a shot at the jet as it manoeuvred and shot back but without hitting any of the Canadians. Several of the Canadian bullets however had hit home and the jet went down sharply in flames. 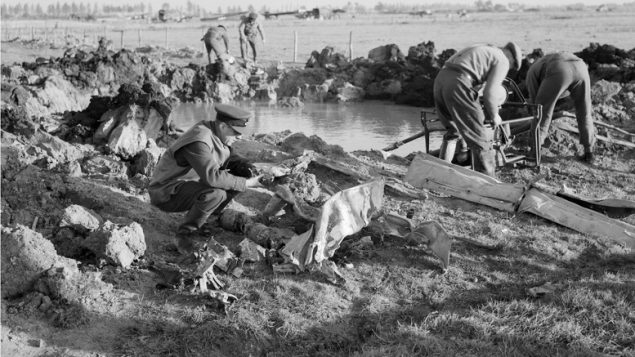 The crash site of the 262 near Nijmegen showing the high speed impact of the damaged jet as an RAF officer inspects pieces while workers drain the water to look for the pilot’s remains. (via donaldnijboer.com)

It was the first actual combat destruction of the German secret weapon. In the end however, in spite of their technological superiority, not enough Me262’s were created to make a difference in the war.

Besides a very successful record, Canada’s 401 Squadron was known also for the incredible feat of another member.

P/O Wally Floody of Ontario had been a miner before the war and his enlistment in the RCAF.  His Spitfire group was taken by surprise by German fighters over occupied Europe on Oct. 27, 1941. Several of the planes, including Floody’s were shot down. He crashed the Spit but was not severely hurt and was taken prisoner, later being sent to Stalag Luft III in Sagan Poland. This camp became famous for “The Great Escape” and for the incredible tunnel created in large part by Wally Floody.

He did not take part in the escape as he was sent to another camp just before the tunnel was completed. For his efforts in creating the escape tunnel at great personal risk, in 1946 he was awarded the Order of British Empire. He was also a consultant for the 1962 Hollywood film “The Great Escape”. Although the film portrays many American involvement, in fact no Americans were involved in the tunnel creation.