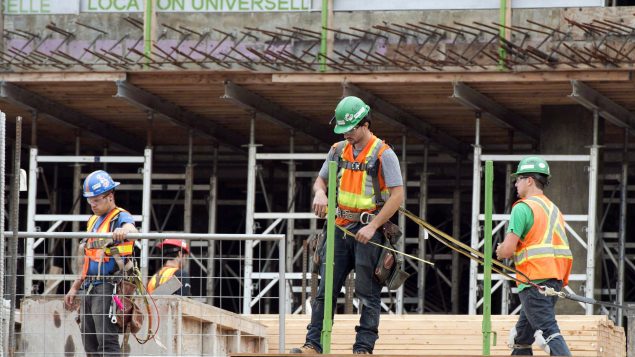 Construction workers on the job at the site for Montreal's CHUM super hospital in Montreal on July 2, 2013. The Canadian economy created almost 28,000 construction jobs in September 2018, reversing some of the losses in the previous months. (Ryan Remiorz/THE CANADIAN PRESS)

However, almost all of the September job gains came from an increase in part-time employment and were mostly concentrated in Ontario and British Columbia with little change in other provinces.

“The monthly gyrations in Canadian jobs data can make it tough to draw many firm conclusions on the true health of the economy, but the underlying picture looks reasonably solid,” said BMO Financial Group chief economist Douglas Porter.

“The main point is that employment is still growing faster than the underlying labour force, cutting into slack and supporting decent income gains.”

September job numbers reinforce the likelihood of an October interest rate hike by the Bank of Canada, and keep a firm foundation on further moves in 2019, Porter said.