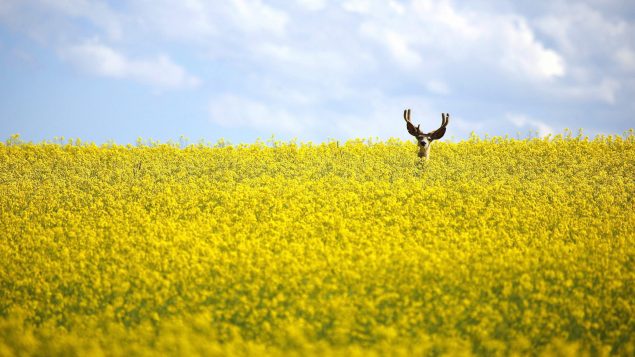 A stag stands in a neck high field of canola north of Cremona, Alta., on July 31, 2011. The agriculture and agri-food industry contributes over $110 billion annually to Canada's gross domestic product, and has been identified as one of Canada's key growth sectors. (Jeff McIntosh/THE CANADIAN PRESS)

The federal government announced Friday that it is launching a multi-partner council to protect Canada’s forests, agriculture and other plants from pests, diseases and other risks.

The Canadian Plant Health Council is a collaborative project between 11 members from national industry associations, academia and federal, provincial and territorial governments representing the plant health sector in agriculture and forestry.

Its goal is to collaboratively implement the Plant and Animal Health Strategy for Canada, protect plant health in Canada from new and emerging risks, drive innovation and ensure that the country’s agriculture and agri-food industry remains competitive and sustainable, officials said.

“Agriculture is vital to Canada’s economy,” Agriculture and Agri-Food Minister Lawrence MacAulay said in a statement.

“The establishment of the Canadian Plant Health Council is an important step in the prevention of risks to our plant resources, as well as in the protection of our plant health.”

“It is important for governments, industry and academia to work together to protect Canada’s plant resources, including our crops sector, from current and emerging risks,” said in a statement Bill Greuel, Regulatory and Innovation Assistant Deputy Minister (ADM) of Saskatchewan’s Ministry of Agriculture.

“This council will play an important role in enabling collective action on activities like pest and disease surveillance and biosecurity.”

The council’s ability to coordinate an effective national response to such threats is extremely important, said Brian Gilroy, president of the Canadian Horticultural Council.