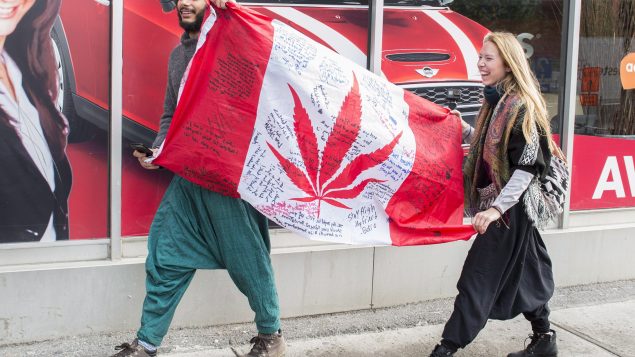 People hold up a Canadian flag with a marijuana logo on it outside a government cannabis store in Montreal, Wednesday, October 17, 2018. (Graham Hughes/THE CANADIAN PRESS)

Canada’s move to legalize cannabis is incompatible with Ottawa’s international legal obligations and damages global efforts to control drugs and protect youth from harm, according to the UN drug watchdog.

“By moving forward with the legalisation of cannabis for non-medical purposes in disregard of its legal obligations and diplomatic commitments, the Government of Canada has contributed to weakening the international legal drug control framework and undermining the rules-based international order,” the Vienna-based International Narcotics Control Board (INCB) said in a statement Wednesday.

The entry into force of Bill C-45, which legalised recreational cannabis use in Canada on Wednesday, is incompatible with Ottawa’s legal obligations under the international drug control framework and is a violation of fundamental provisions of the 1961 Single Convention on Narcotic Drugs, as amended by the 1972 Protocol, the INCB statement said.

The protocol obliges state parties of the convention to limit the production, manufacture, export, import, distribution of, trade in, use and possession of drugs exclusively to medical and scientific purposes, the UN agency said. 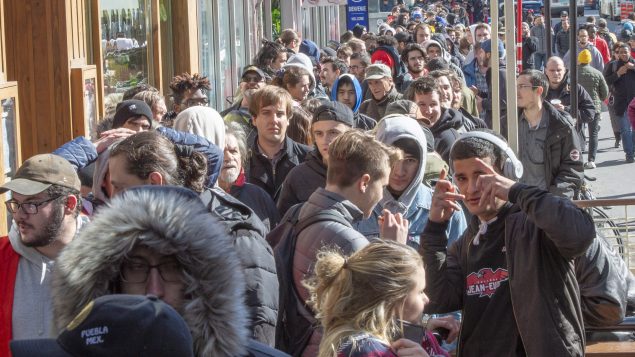 Hundreds of people lineup at a government cannabis store Wednesday, October 17, 2018 in Montreal as the legal sale of cannabis begins in Canada. (Ryan Remiorz/THE CANADIAN PRESS)

Canada is the first OECD country to legalize recreational use of marijuana and several other jurisdictions are closely watching its example.

INCB president Viroj Sumyai said he is concerned “about the impact of cannabis legalisation in Canada on the international consensus embodied in the three United Nations drug control conventions.”

The UN agency is also “deeply concerned about the public health impact of these policy choices on the health and welfare of Canadians, particularly youth,” he added.

The board will examine the matter at its 123 rd session scheduled to take place from Oct. 30 to Nov. 16, he said.

Richard Walker, a spokesperson for Global Affairs Canada, said the legalization of cannabis does not change Canada’s commitment to meeting the overarching goals of the UN drug conventions.

Canada’s approach to cannabis is also consistent with the overarching goals of the conventions to protect the health and well-being of Canadians, he added.

The UN agency is not alone in raising concerns about health implications of the new legislation.

The Canadian Medical Association Journal blasted Monday the move to legalize recreational cannabis use as a “national, uncontrolled experiment” that pits the profits of cannabis producers and government tax revenues against the health of Canadians.

Investment in cannabis firms has risen substantially over the past year in anticipation of legalization, with new producers popping up across the country, the CMAJ said.

“Their goal is profit, and profit comes from sales — sales of a drug that, according to Health Canada, will cause a problem in nearly one in three adult users and an addiction in close to one in 10, with higher risks in youth,” said the editorial penned by Diane Kelsall, the CMAJ’s editor-in-chief.