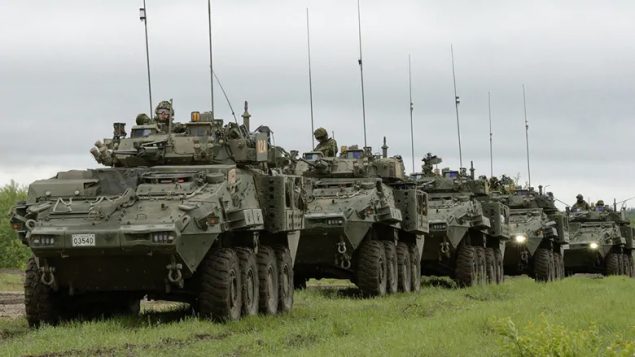 Neither "trucks" nor "jeeps", a line of the LAV-6 armoured vehicles mounted with the destructive 30mm-chain gun. Made in Canada, the deal to sell hundreds to the Saudis has always been controversial, and even more so with the murder of journalist Jamal Khashoggi ( Combat Camera-General Dynamics)

A new survey shows Canadians are relatively evenly divided over selling Canadian made weaponry to Saudi Arabia, specifically a deal for armoured vehicles developed by London Ontario based General Dynamics.

It was, and is, a massive arms deal worth some $15 billion dollars in the sale of armoured combat vehicles to Saudi Arabia.

The deal has always been  controversial given the Saudi’s poor record on human rights, and questions over how and against whom the Canadian vehicles might be used

At the time in 2014, the Conservative leader Stephen Harper once poo-poohed criticism of the deal as involving, “ trucks”. In confirming the deal after taking power in 2015, Liberal leader Justin Trudeau referred to them merely as “jeeps”.

The deal involves some 928 of the vehicles known as LAV-6, “Light Armoured Vehicles” an updated and improved version of the popular LAV-III.   The deal includes 14 years of ammunition support, crew training in Canada and Europe,  and “embedded” maintenance with a team based in several workshops.

Over 350 of the vehicles destined for Saudi Arabia are standard troop carriers, while at least 119 are classed as heavy assault vehicles armed with a powerful 105mm cannon, the same calibre as Leopard tanks and certain U.S. Abrams tanks.  A similar number are armed with weapons for “anti-tank” use, and a similar number again are armed with a 30-mm chain gun which can fire from 300-600 of the large rounds per minute.

With the international scandal involving the blatant Saudi murder and botched coverup of journalist Jamal Kashoggi, allegedly on the order of senior Saudi officials, the issue of the weapons sale has again come to the fore.

A new survey by the Angus  Reid Institute found that about 46 per cent of Canadians think the ongoing multi-year deal should be cancelled. However, an almost equal number (44%) think the deal should continue, but that Canada should not sell arms to the Saudis in future. 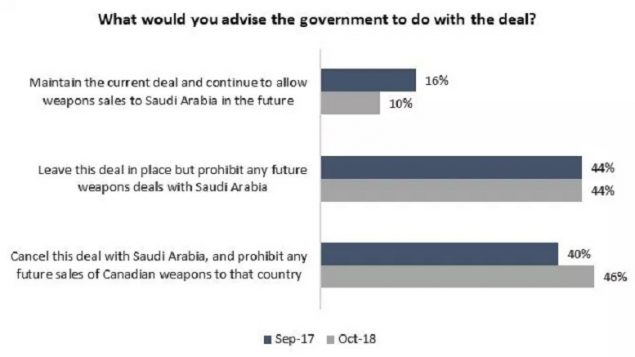 Asked which countries Canada should not sell military arms to, 76 per cent of Canadians say Saudi Arabia should be banned, which is a 14-point increase from 2017. The same number say Canada should also refuse arms sales to Iran, while 54 per cent say no arms should be sold to China.

The government has said with the cancellation clause in the contract, the cost to Canadians of ending the deal would also be in the billions of dollars.