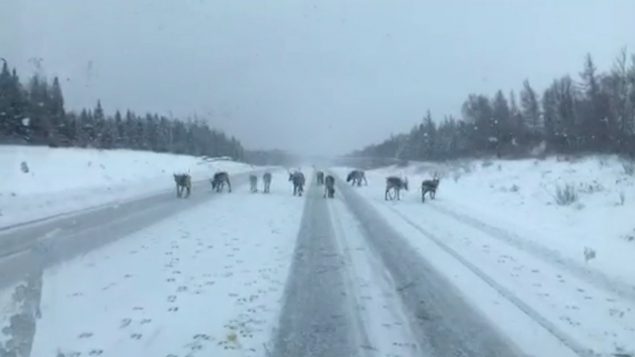 Trucker Jason White videotaped a herd of caribou on the Trans-Canada Highway near Deer Lake in the eastern province of Newfoundland and Labrador. (Jason White/hand out photo/The Canadian Press)

Could it be Santa’s reindeer, asks trucker

A truck driver in the eastern province of Newfoundland and Labrador encountered a herd of about a dozen caribou on the highway, posted a video of them along with the comment, “I think Santa’s reindeer’s are lost on the west coast!!! Coolest thing I’ve even seen on the road!!!”

White had been making a delivery on the west coast of Newfoundland in snowy conditions. He posted the video on his Facebook page and was amazed to get a call from the wire service Canadian Press. He also re-posted articles written by several other media outlets and noted, “I made those little caribou famous.”

Snow has come to eastern Canada early this year. From here on in, the references to Christmas will multiply as has the advertising by retailers across the country.