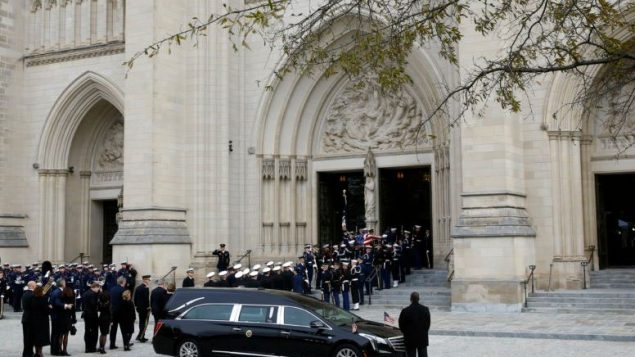 Brian Mulroney, Canada’s Prime Minister from September 1984, to June 1993, was one of the people who spoke at the State Funeral for former United States President, George Herbert Walker Bush today.

The service took place at the Episcopal Cathedral Church of Saint Peter and Saint Paul in the City, more commonly known as the National Cathedral in Washington.

The “pinnacle of U.S. Canada relations”

There were several laughs during the solemn ceremony, a fitting tribute to the senior Bush, who was known and loved for a great sense of humour.

A long time friend of the former president, Brian Mulroney recalled the many international achievements of the man who served only one term.

“President Bush was also responsible for the North American Free Trade Agreement, recently modernized and improved by new administrations, which created the largest and richest free-trade area in the history of the world, while also signing into law, The Americans With Disabilities Act, which transformed the lives of millions and millions of Americans forever.” Mulroney told the assembled family, friends and dignitaries from around the world, including Prince Charles, Britain’s Prince of Wales. 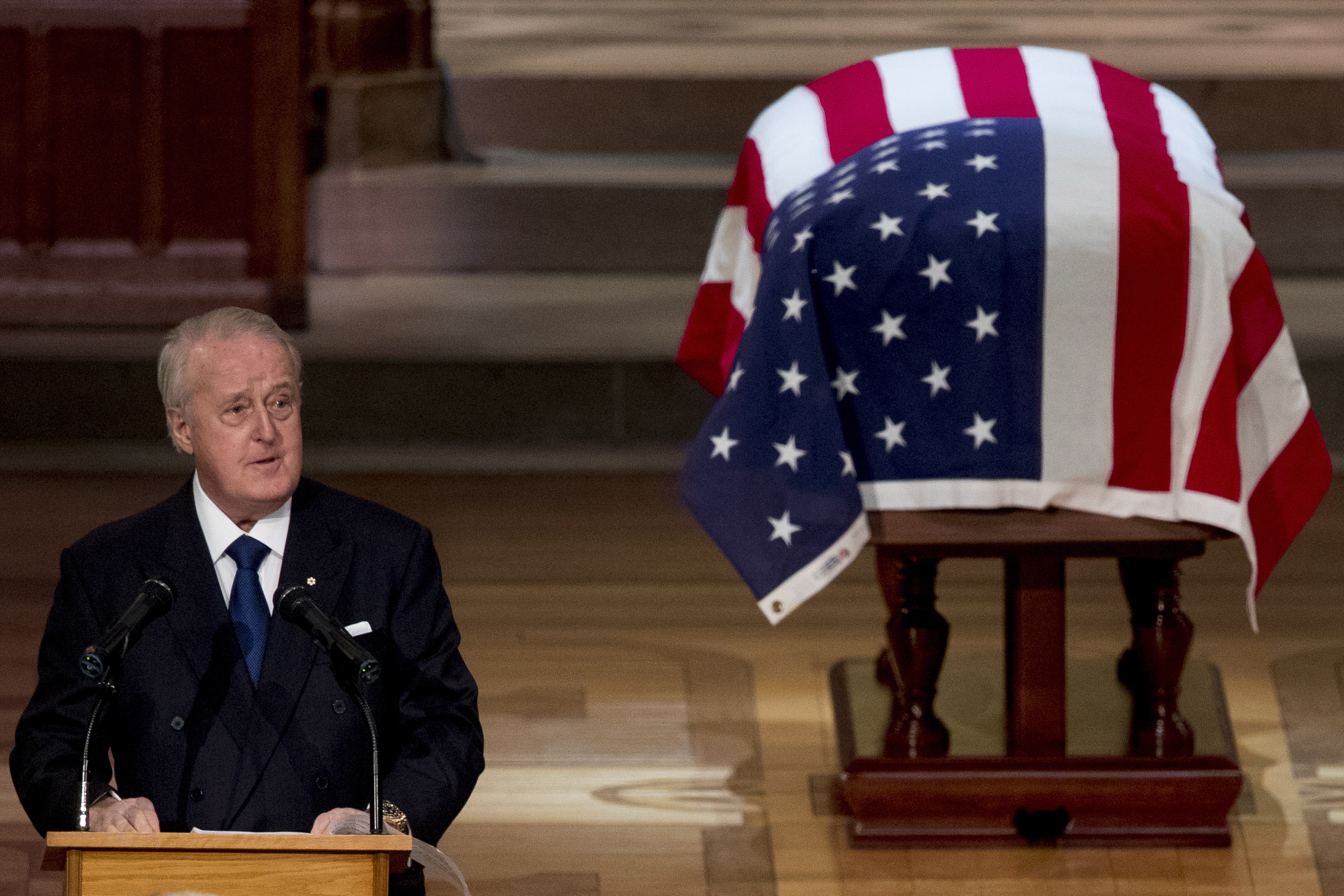 Brian Mulroney got emotional towards the end of his eulogy, as he described the admiration and deep friendship he shared with H. W. Bush.

Former CBC reporter, Brian Stewart, who covered the international scene during that time, described Brian Mulroney as “perhaps Canada’s greatest foreign policy Prime Minister” and that his time in power was the “pinnacle of U.S. Canada relations.”

In an interview on the CBC News Network today, he reminded viewers that it was Brian Mulroney who convinced the Americans to hold off on the invasion of Iraq, known as Desert Storm, the first Gulf War, until there was U.N. approval.

This resulted in the military alliance that consisted of a coalition of 29 nations.

“When the Berlin Wall came down, and this was once of the great moments of the entire twentieth century,” Stewart said, a very emotional experience he recalled, “What leader of the world would not want to be there in Berlin to celebrate and on camera and give interviews and the rest of it? Well one leader didn’t want to, and it was George Bush; he said ‘I’m not going there, it will seem like I’m boasting, it’ll seem like I’m being triuphant. No, I’m going to stay home,” Stewart recounted marvelling at the decision. “I can’t imagine any other U.S. president being that way.” he said. 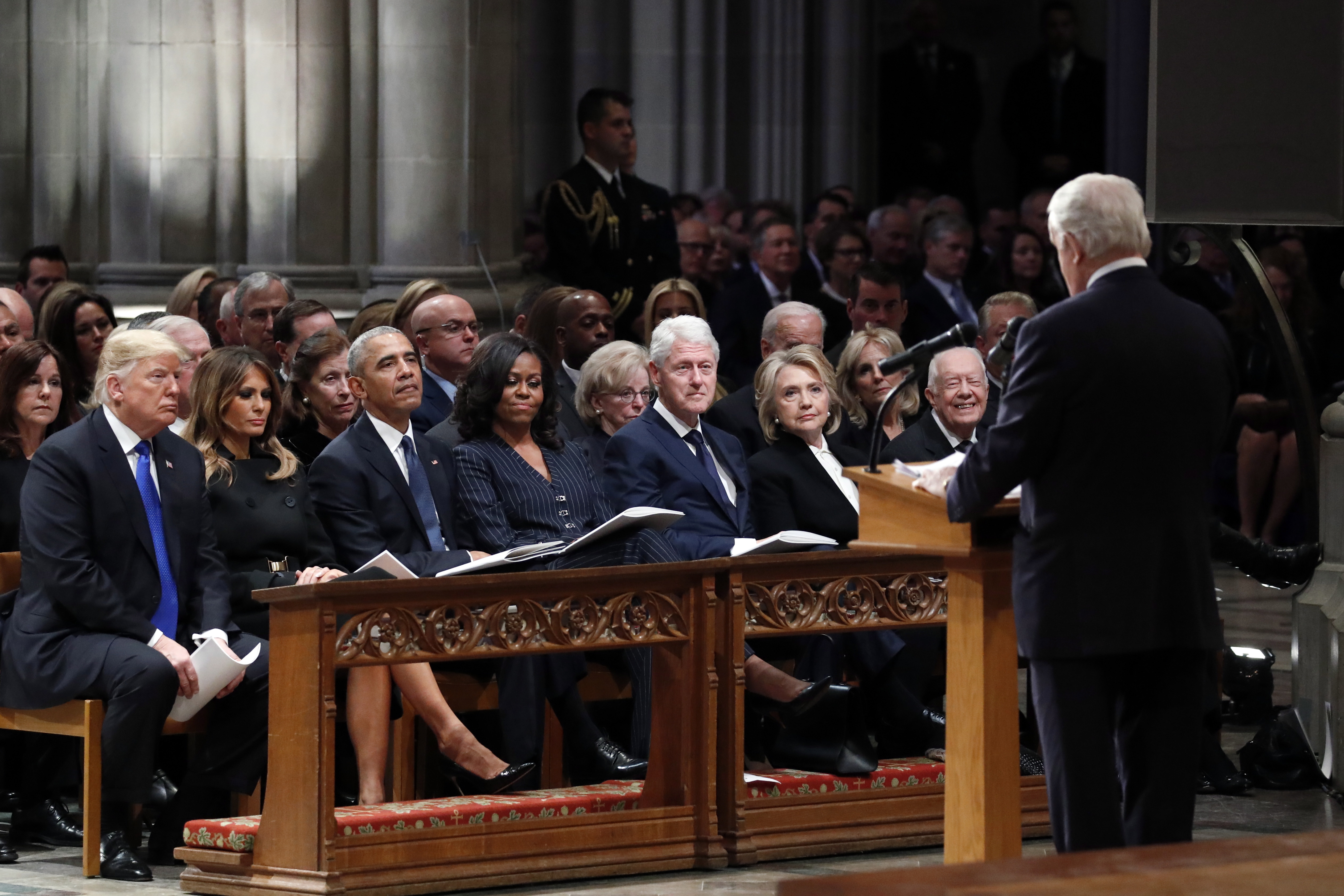 The casket, now on its way to Texas, will sit overnight at Texas A & M University in College Station, Texas.

Following a service tomorrow at St. Martin’s Episcopal Church in Houston, George H. W. Bush will be buried on the grounds of the George H. W. Presidential Library, alongside his wife Barbara and their daughter Robin, who died of leukemia at the age of three.

Meanwhile in Ottawa, the flag on the Peace Tower, on Parliament Hill, is flying at half-staff today.

(With files from the Canadian Press, AP and CBC)