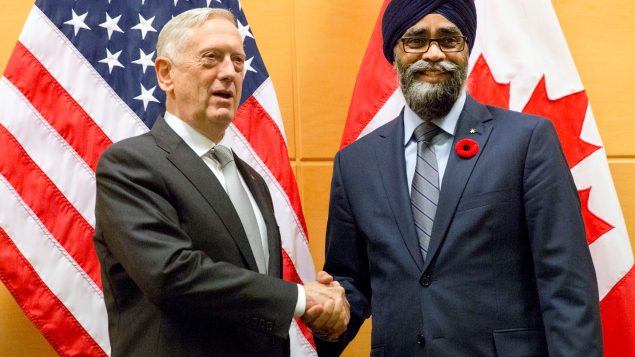 Defence Minister Harjit Sajjan and his U.S. counterpart Secretary of Defense James Mattis will host on Thursday a meeting of 13 members of the Global Coalition to Defeat ISIS in Ottawa, according to Canadian and U.S. officials.

This meeting will follow up on the previous discussions in Brussels in June and “will focus on the Coalition’s continued efforts to counter the ISIS threat, take stock of recent progress and discuss the tasks and challenges ahead,” Byrne Furlong, Sajjan’s press secretary, said in a terse email statement.

While under Operation IMPACT Canada has about 850 of troops stationed in the Middle East, including members of the Canadian Special Operations Forces Command in a “train and assist” capacity in Iraq, no Canadian troops are involved in the fighting to capture the last ISIS stronghold of Hajin in eastern Syria.

A favour to the Pentagon 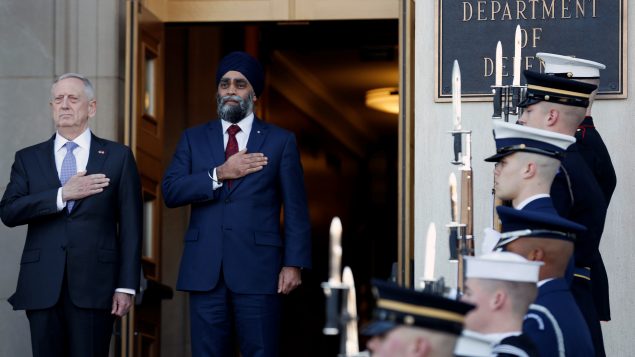 University of Waterloo political science professor Bessma Momani, who specializes in the Middle East, said one of the reasons for holding the meeting in Ottawa has to do with internal U.S. politics and with the desire not to allow the Trump administration to “hijack” the issue and politicise it.

Sajjan has been asked in the past to host such meetings because Canada provides a venue where issues of interest to the Pentagon such as peacekeeping can be discussed without being unduly politicized by the administration, Momani said.

And the situation in Syria requires some deft balancing on the part of the Pentagon.

The fight against ISIS is the only way the Pentagon has to remain in Syria without seeking what’s called an Authorization for the Use of Military Force (AUMF) from Congress. The AUMF is the legislative authorization the executive needs to wage wars.

Because ISIS was considered an offspring of al-Qaeda, the U.S. government has been using the 2001 AUMF, which authorizes the president “to use all necessary and appropriate force against those nations, organizations, or persons he determines planned, authorized, committed, or aided the terrorist attacks that occurred on September 11, 2001.”

Under Presidents George W. Bush and Barack Obama, the 2001 AUMF was used to justify the deployment of U.S. forces to Afghanistan, the Philippines, Georgia, Yemen, Djibouti, Kenya, Ethiopia, Eritrea, Iraq, and Somalia, according to reports by Business Insider.

“They never went back to Congress to get a new AUMF,” Momani said.

But now that the fight against ISIS in Syria is almost over, President Donald Trump wants to bring the troops home. 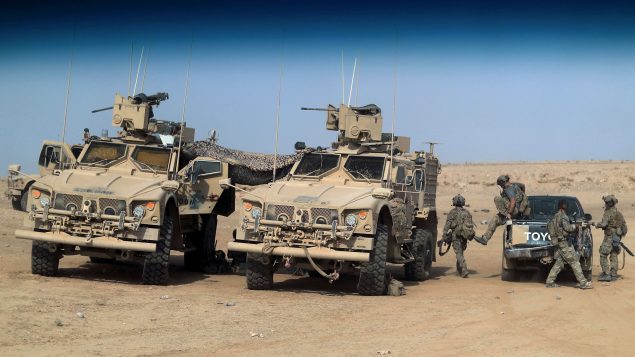 US-backed forces are pictured near the village of Susah in the eastern province of Deir ez-Zor, near the Syrian border with Iraq on September 13, 2018. – US-backed fighters are fighting in Deir ez-Zor to oust Islamic State jihadists from the town of Hajin on the east bank of the Euphrates, the most significant remnant of the sprawling “caliphate” the jihadists once controlled spanning Syria and Iraq. (AFP/Getty Images)

However, Mattis and some elements in the Pentagon want to stay in Syria because they want to prevent Iranian expansion into Syria and into Lebanon, Momani said.

“But… they can’t say, ‘We’re there to prevent Iranian expansion,’ because the AUMF is not about that,” Momani said. “The AUMF is about fighting ISIS.”

With ISIS reduced to a small pocket in Hajin, on the eastern bank of the Euphrates River in the Deir ez-Zor governorate in eastern Syria, the U.S. is about to run out of even that excuse.

“In many ways, I don’t think it’s in the U.S. interest to say they [ISIS] are completely gone,” Momani said. 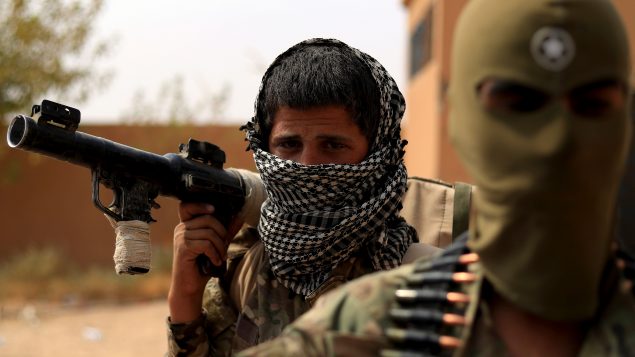 Members of the Syrian Democratic Forces (SDF) gather next to a building in the village of Susah in the eastern province of Deir ez-Zor, near the Syrian border with Iraq on September 13, 2018. – US-backed fighters are fighting in Deir ez-Zor to oust Islamic State jihadists from the town of Hajin on the east bank of the Euphrates, the most significant remnant of the sprawling “caliphate” the jihadists once controlled spanning Syria and Iraq. (Delil Souleiman / AFP/Getty Images)

Fierce clashes have been taking place for weeks around Hajin with the U.S.-backed Syrian Democratic Forces (SDF) trying to capture the last remaining ISIS stronghold.

The fighting has resulted in hundreds of civilian casualties, according to war monitoring group Airwars.

The independent investigative group which tracks civilian casualties in Iraq and Syria, estimates that at least 98 civilians likely died in 16 separate events in and around Hajjin in October alone – the worst reported non-combatant fatalities from U.S.-led actions since the battle for Raqqa.

A significant increase in artillery and air strikes by U.S., French, British and Dutch members of the international military alliance fighting ISIS is to blame, Airwars said.

“While the U.S.-led Coalition has so far conceded just seven deaths from Operation Roundup – the campaign it began in May to drive ISIS from its last Syrian stronghold – the reality on the ground appears very different,” said in a statement Chris Woods, director of Airwars.

“More than 1,100 civilian deaths have locally been alleged so far, and Airwars presently believes, based on available reports, that at least 420 non-combatant deaths from coalition actions around Hajin do appear likely to date.”

Far more care must be taken to protect civilians by U.S., Dutch, French, British and Iraqi forces and their SDF ground allies, the group said.

For the first time since the Kremlin intervened in the Syrian civil war in September 2015, there were no reported civilian casualties from Russian actions in Syria in October, the report said.

“With casualties from Assad government forces and non-state actors including ISIS also sharply down, it appears the U.S.-led alliance was responsible for more civilian harm in Syria in October than any other belligerent,” Woods said.