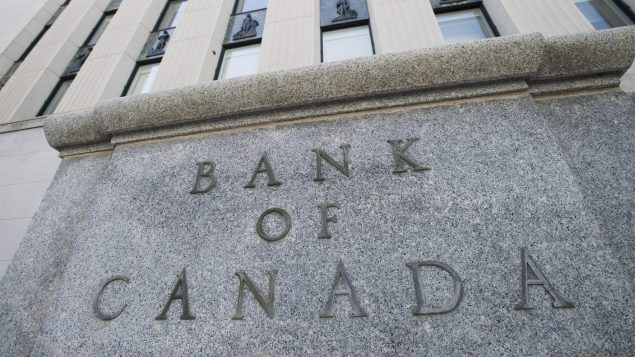 With global economic growth projected to slow down in 2019 and increasing signs that the U.S.-China trade war is weighing on global demand and commodity prices, Canada’s central bank decided to keep its key interest rate unchanged today.

The Bank of Canada today maintained its target for the overnight rate at 1.75 per cent. The Bank Rate is correspondingly 2 per cent and the deposit rate is 1.5 per cent, the central bank announced Wednesday.

The bank’s benchmark rate directly affects the interest rates that Canadian consumers get from their retail banks on their mortgages, loans or on their savings deposits. When the central bank increases its interest rate, it makes borrowing more expensive — but it’s good news for savers.

“The roller coaster ride of the past few months has brought a note of greater caution to the Bank of Canada’s communications, and today’s decision looks to be an extension of that,” DePratto wrote in a research note to clients.

Bank of Canada Governor Stephen Poloz still sees more rate hikes down the road, but isn’t in any great rush to get there, DePratto said.

“The global economic expansion continues to moderate, with growth forecast to slow to 3.4 per cent in 2019 from 3.7 per cent in 2018,” the bank said in a press release. “In particular, growth in the United States remains solid but is expected to slow to a more sustainable pace through 2019.”

However, as Washington and Beijing remain at loggerheads over Trump administration trade war measures directed at China, the trade uncertainty is beginning to affect global demand and commodity prices, the bank noted.

In addition, global benchmark prices for oil have been about 25 per cent lower than assumed in the October Monetary Policy Report (MPR), reflecting sustained increases in U.S. oil supply and, more recently, increased worries about global demand, the bank said.

These worries have also caused volatility in bond and stock markets.

While U.S. stock markets rose recently amid some optimism over trade talks between Washington and Beijing, 2018 ended with the Dow Jones Industrial Average down 5.6 per cent, the steepest decline since the financial crisis, according to the Wall Street Journal.

The drop in global oil prices also impacts the Canadian economy, which is heavily dependent on oil and commodity prices.

Nevertheless, the Canadian economy that has been performing well overall, the bank said.

The economy has been growing at a good pace, creating new jobs and pushing unemployment to a 40-year low.

The bank said it expects exports and non-energy investment to grow solidly, supported by foreign demand, the newly renegotiated free trade agreement with the U.S. and Mexico, the lower Canadian dollar, and federal tax measures targeted at investment.

The central bank projects that Canada’s economy will grow by 1.7 per cent in 2019, 0.4 percentage points slower than what it projected in October.

Core inflation measures remain clustered close to 2 per cent, owing mainly to lower gasoline prices. On the other hand, the lower level of the Canadian dollar will exert some upward pressure on inflation.

“Weighing all of these factors, Governing Council continues to judge that the policy interest rate will need to rise over time into a neutral range to achieve the inflation target,” the central bank said. “The appropriate pace of rate increases will depend on how the outlook evolves, with a particular focus on developments in oil markets, the Canadian housing market, and global trade policy.”