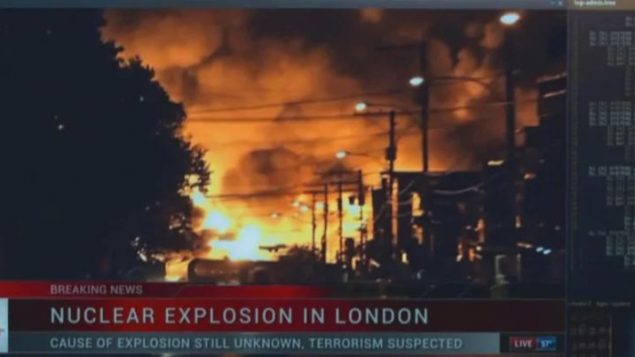 A still from the Netflix series Travelers which uses footage from the Lac-Mégantic rail disaster. The show's producers have apologized and say they will edit out the images. (Netflix/Radio-Canada)

Makers of the Netflix original sci-fi series Travelers have had to apologize and promise to edit out a few seconds of footage after it emerged that they had used real-life images of the Lac-Mégantic train disaster in a scene depicting a fictional nuclear attack on London, England.

Forty-seven people were killed in Lac-Mégantic on July 6, 2013 when a runaway train laden with oil jumped the tracks and exploded, wiping out a large part of the downtown.

Toronto production company Peacock Alley Entertainment said the images were purchased from an archival footage service, and it should not have used them.

“We were not aware where these images were from,” said Peacock Alley president Carrie Mudd in an email to Radio-Canada. “We sincerely apologize.”

The company said it would edit a new version of the episode.

Another Netflix series, “Death Note,” has recently been criticized for using footage of a deadly train crash which occurred in 2010 in Belgium.